Whatever happened to January?  It doesn't feel like we've had 31 days since the New Year, and yet here we are, past the end of January and galloping through February. Anyhow....

Last week we were busy at Lee Mills having a big clear up (or Big Clear Up) - things that had been sorted once but not quite finished, things that had got into a bit of a mess,...  Mostly I spent the week sorting out knitting needles (more later).  And in a drawer that probably hasn't been opened for years, we found a long-forgotten cache of 1950s knitting wool.

It's Patons Lucelle Fine Ply, and as you can see I found some Lucelle pattern leaflets elsewhere in the Guild collection.


Each ball has a ticket buried in the middle:

It is very fine - we should probably call it lace weight now, I think.  The earliest leaflet I found (from 1954) is for a 'Shetland-pattern jumper' and is knitted on 16s and 17s.  I can't find a knitting needle conversion chart that goes below a 14 (2mm), but from a British wire gauge conversion chart, it seems that a 16 is 1.6mm, and a 17 is 1.4mm.  Or to put it another way, the tension specified in the pattern, for stocking stitch on size 16 needles is 54 stitches and 78 rows to 4 inches/10cm.  Here's the illustration, should you feel inspired to have a go.  (It only takes 4oz. (about 100 g.) of yarn, so at least it should be a thrifty knit.) 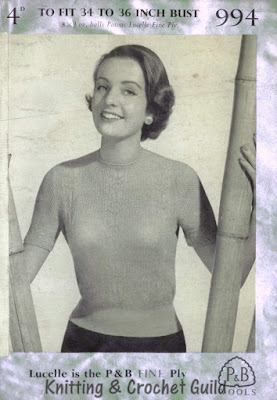 It has three vertical panels of a lacy pattern on the front, but unfortunately the leaflet illustration doesn't show the lace clearly - you would have to knit a swatch to see what it looks like.

Later Lucelle patterns, like Patons 114, were knitted to a looser tension, on 13s and/or 14s. 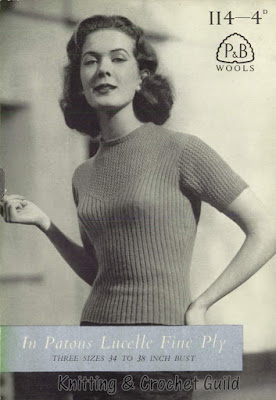 And even men were allowed the luxury of Lucelle:  you could knit the pullover or long-sleeved  sweater in Patons 124 below either in 3-ply or in one strand of 2-ply and one strand of Lucelle.  The leaflet says "Lucelle and 2-ply knitted together make a fabric of the utmost affluence -- but there's also a down-to-earth version in 3-ply."  (Though a hand-knitted long-sleeved sweater in 3-ply seems very luxurious to me, and not at all 'down-to-earth'.) 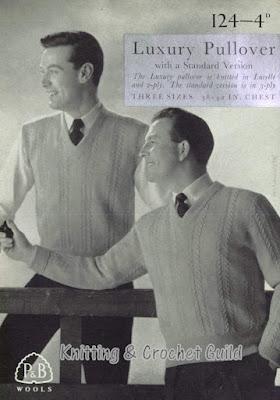 James Norbury, who was the chief designer for Patons throughout the 1950s, used Lucelle in The Penguin Knitting Book (published 1957) for two evening jumpers.  Here's the nicer one.


It has a chevron band around the low neckline, with a small cluster of pearls and sequins on each point - very elegant.  I am sure that James Norbury had a team of knitters at his disposal, so he would have had no qualms about designing a jumper that requires a tension of 42 stitches and 52 rows to 4inches/10cm. on size 13 needles.

The latest Lucelle leaflets I have found so far are from 1960.  Patons leaflet 1054 is for 'Two Lucelle Lovelies':


I think that by 1960, there were fewer knitters with the patience to knit sweaters with very fine yarns - a new generation of knitters had not had the experience of clothes rationing, when you had to make a very little wool go a long way.  So even 3-ply knitting was beginning to seem like hard work, and I suspect that Lucelle disappeared not long after 1960.  Now we would knit lacy scarves and shawls with such a fine yarn, on much larger needles -- much less work per square inch.
Posted by Barbara at 12:29