I'm very behindhand with writing posts - since my last post at the beginning of the month, we have been on holiday in Spain and Portugal, and I've done two knitting & crochet trunk shows.  As well as all the usual business of life.  I'm trying to catch up a bit before September runs out on me.

Here is a very small selection of the things we saw on our holiday - a tour of Roman Lusitania with Andante Travels. The Roman province of Lusitania was mostly within present-day Portugal, but part of it is now Spain, including its capital, Merida.  So we flew to Lisbon, but spent a lot of the holiday in Spain.

We saw, of course, lots of Roman sites, including the theatres at Merida and Medellin, Roman country villas and town houses, and a fish processing site at Troia.  And two Roman dams (built to supply Merida with water) that are still functioning, although the aqueducts themselves are now ruined.  The aqueduct is still very impressive, though, as it crosses a valley on high arches. 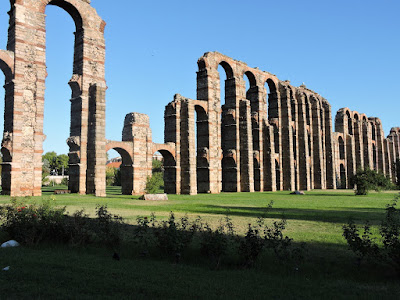 The Museum of Roman Art in Merida houses a wonderful collection from the local area.  Here's the gravestone of a woman, Sentia Amarantis, who presumably kept a tavern.  It appears to show someone filling a jug from a barrel, and presumably the barrel contained beer and not wine. 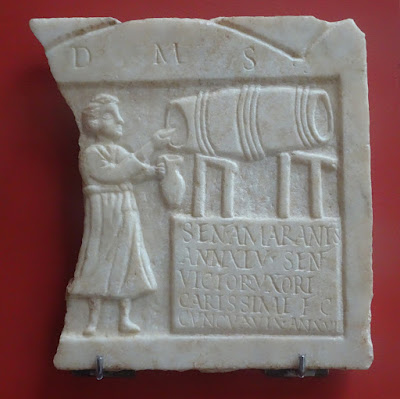 /
There were some wonderful mosaics in the museum.  One huge mosaic featured two winning chariot-racing teams - here's a detail. 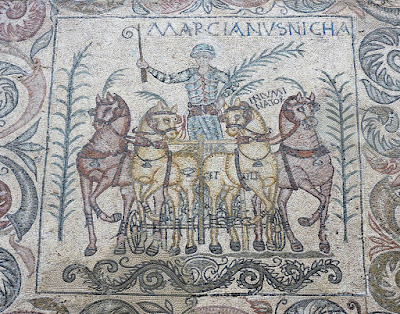 Another one that I liked very much had a geometric design in black and white. Here's the central motif. 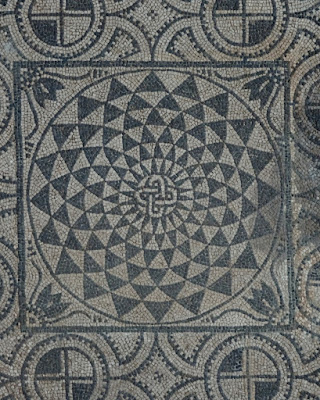 We visited prehistoric sites too. The Cromeleque dos Almendres is collection of nearly 100 standing stones, arranged in  two concentric ellipses, and an older circle.  The stones are huge rounded granite boulders - very characterful.  Some of them allegedly have shallow carvings on them, but the light wasn't right to see them, and I think the smooth stones are beautiful without any additions. 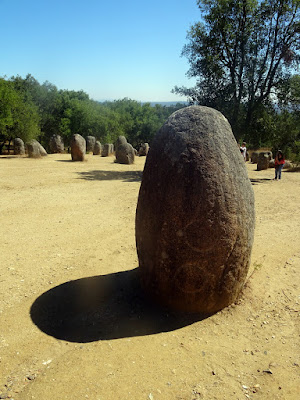 The countryside around there has many cork oaks, which we had not seen before.  The number 1 on this tree signifies that the bark was removed in 2011  (and it will be ready to strip again in 2020). 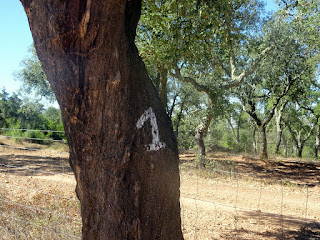 Here's a tree that was stripped much more recently (this year I think) showing the red/orange layer underneath. 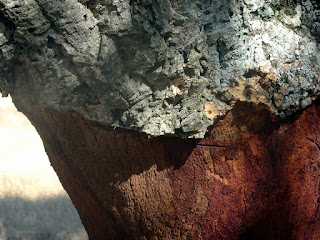 We also saw many reminders of the Moorish occupation of the area in the Middle Ages, including several cisterns - this one is under the museum in Caceres. 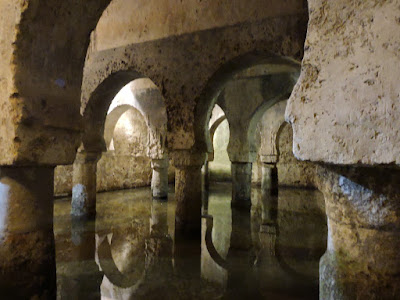 And a couple of aqueducts built long after the Romans (and the Moors) had gone. This one is at Elvas (just on the Portuguese side of the border).  It was begun in 1498, and still carries water.  We couldn't understand why it took such a zigzag route - from left to right over the road, and then from right to left back again.  (Surely easier to re-route the road?) 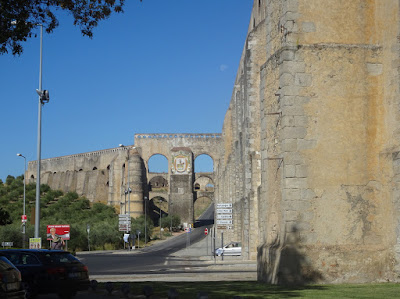 \Here's the same aqueduct from the other side. It's about 30m. high at this point - and all that vast quantity of stone is to carry a small channel at the very top. 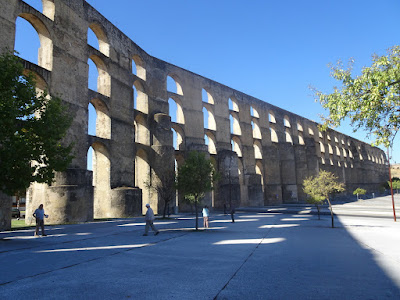 We saw storks' nests everywhere  on telephone poles, on electricity pylons, and on top of all kinds of buildings.  There are several on top of the Aqueduct at Merida.  The young birds have fledged and left the nest by now, but some of the nests had a stork on them - perhaps thinking ahead to next spring?  Here's one of the churches in Medellin, with a stork on its nest on the tower. 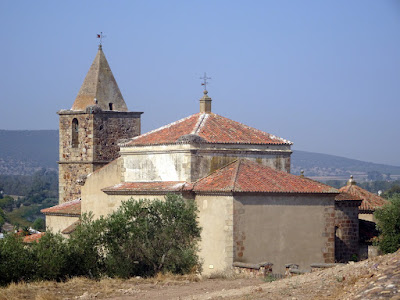 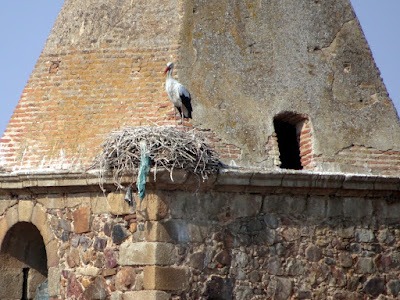 And evidently the storks don't mind being very close to their neighbours - another church tower in Medellin had four storks' nests, two right next to each other. 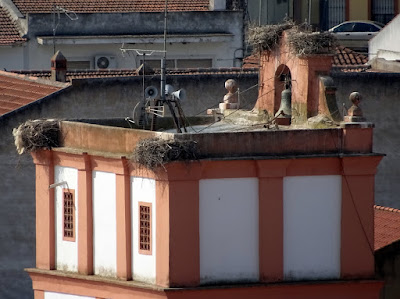 I didn't take any knitting with me (too busy) but we did see some yarn-bombed trees in Evora. (Though it's crochet, not knitting. 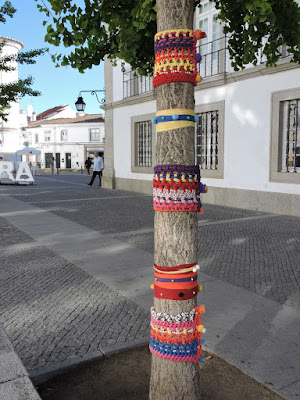 I was fascinated by the different styles of chimney that we saw.  Usually they are built like a little house, with a pitched roof. 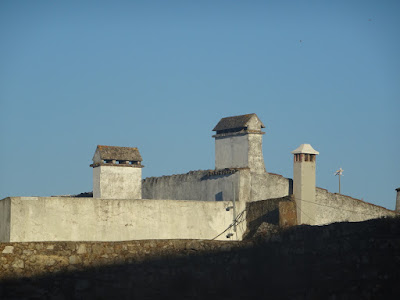 The street lamps were also very varied and stylish. 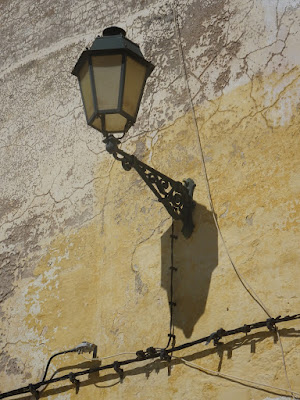 As you can see from the photos, it was generally sunny, and it was very hot too.  We were very well fed, in between visiting archaeological sites. (Delicious cheeses, in particular.  Pork and ham, too - I came home a few pounds heavier.) And wine was plentiful. It was a great holiday.
Posted by Barbara at 21:22