Last weekend, we were in Kent, staying with friends.  The weather was perfect  - hot (but not too hot) and sunny.  The men of the party went to the Military Odyssey, a multi-period re-enactment show - a fun day, allegedly.  Sue and I went instead to Sissinghurst instead.  It's one of my favourite gardens, but I have not been there for many years, so it was good to re-visit it.  And the following day we went to Knole, where Vita Sackville-West grew up.

Another day we went to a small book fair in Tenterden, a very pretty little town   I bought a couple of old magazines there,  including an issue of Britannia & Eve from December 1930.

As the cover says, it was "A Monthly Magazine for Men & Women".  The contents are an odd mixture.  There is a lot of fiction, and some non-fiction articles: on the early life of Prince Albert, the wife of Chiang Kai-Shek, "The Psychology of Dress", and several more.

There are two articles on Hollywood and the current films - it seems that the "Talkies" were just taking over from silent films, and so this is commented on in a couple of places.  There is a page of stills in a new film in which "Miss Evelyn Laye makes her talking debut".  (According to Wikipedia, Evelyn Laye was British and had appeared in plays and musical comedies.  In the new film, she plays a flower-seller in a cafe in Hungary, and also a famous singer who she agrees to impersonate, and a captive in a nobleman's castle. It was a Samuel Goldwyn film and, says Wikipedia, a huge flop.)  Elsewhere, one of the magazine's writers speculates, "I am not sure that we are not altering our voices and that the Talkies are not responsible for new intonations, new phrases".

There are are also several articles on fashion, and others on Christmas decor and cookery, that you would think would be aimed more at woman readers than men.

Because it's a Christmas issue, the fashion pages present evening gowns (though there is another article on what to wear for a winter sports holiday in Switzerland).  The fashions are all illustrated with drawings rather than photos, and women were evidently supposed to be tall, slim and willowy.

This gown is in black velvet with a band of net above the hem, and a short jacket of net too.

Of course, no real woman looks like the drawings - it would be grotesque if she did.  Elsewhere in the magazine is an article on women's golf, illustrated with several photos of real women looking far from slim and willowy - in fact, rather frumpy. 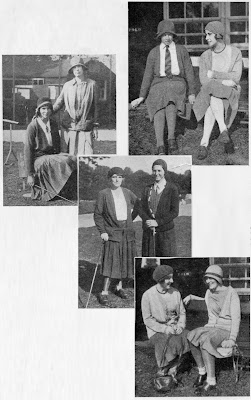 Women always wore a hat when out of doors, and a close-fitting beret was popular for golfers. An ad shows another style of hat favoured by some of the golfers, and that it could look attractive (but not if you sit slumped like a sack of potatoes, like one or two of the women in the photo above).


The ads are fascinating, as usual in old magazines.  I was intrigued to see the range of electrical goods you could buy for your home, even in 1930s - a toaster, a vacuum cleaner, an iron, an electric kettle, a coffee percolator,...


Another ad shows a range of radios and gramophones (and a combination 'graphophone').

I was astonished at the prices - the cheapest 'radio table model'  in the ad is 20 gns.  (A guinea was £1 1s, so 20 guineas was £21).  The equivalent today, from the Bank of England's historic inflation calculator, is over £1200.  That's partly because it's designed to be a smart piece of furniture, in a wooden cabinet, but even so, that's huge amount of money for a radio.  (And there weren't many programmes to listen to, anyway.)


But my favourite ad is this one for Dolcis shoes.  I love the Art Deco styling, and the shoes are very stylish - though the evening shoes in crepe de chine and velvet wouldn't last long.


Unfortunately, although the magazine is 170 pages long, there are some missing at the end, as I found when I tried reading one of the stories. So now I shall never know the ending of 'Shane of the Sorrowful Islands', by Beatrice Grimshaw, a 'drama of mutiny in the Solomons'.  Very disappointing.