I do like a knitting needle with a patent number.  (At least I do if I can find the patent - sometimes I can't, and then it's just frustrating.)  It seems so unlikely that something as straightforward as a knitting needle should have anything patentable about it.  But several brands of knitting needle that we have in the Knitting & Crochet Guild collection do have patent numbers, for instance the Double Century needles that I have already written about.

Another brand with a patent number is Stratnoid  (a horrible name). 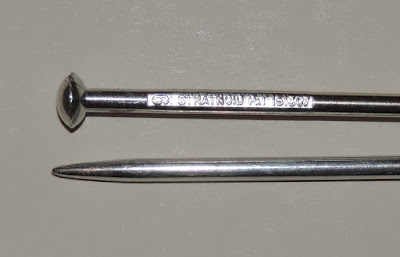 Patent number 151307 was issued in 1919.   The patentee was Harry Norman Lilley, of Astwood Bank near Redditch, and he said in the application:


"My invention relates to improvements in the manufacture of knitting pins, crochet hooks and the like and has for its object to enable such articles to be easily and rapidly produced in such a manner that they are not liable to get rusty or otherwise deteriorated in use as has hitherto been the case.

Knitting pins, crochet hooks and the like have usually been made out of steel and plated or otherwise polished in order to render them rustless and not liable to be deteriorated in use and therefore have to undergo a series of processes whereby the production of such articles by these means requires undue time. To avoid this it has been proposed to manufacture knitting pins and crochet hooks of aluminium but this is objectionable in use as it marks or soils articles with which it contacts.

Such articles need not particularly be made of steel, and our invention ... consists in making knitting pins, crochet hooks and the like of aluminium and manganese alloy which is readily workable, such as that which is known under the registered trade mark "Duralumin", whereby an easy manufacture may be undertaken which effects a large saving both in tools and machinery."

It's interesting that aluminium by itself was "objectionable in use" because it would stain the wool - presumably that's why later aluminium needles are anodised in pretty pastel colours.  Also interesting that the patent doesn't mention another big advantage of the Stratnoid needles - they are much lighter than steel needles, but very strong.   In the KCG collection, we have a haberdasher's catalogue of knitting and crochet equipment from 1918-19 (see here), that lists knitting needles made of steel, bone, wood, vulcanite and ivory.  Anything finer than a size 12 (2.25mm) had to be steel, but the thicker needles (more than about 4mm) were only sold in the lighter materials.

At the 1911 census, Harry Lilley had been a commercial traveller for a needle manufacturer, so although he obviously understood the pros and cons of different knitting needle materials from the sales point of view, it doesn't seem likely that he knew a lot about metallurgy and the processes involved in making knitting needles by 1919.  But all the patent says, really, is "I think it would be a good idea to make knitting needles out of this new Duralumin stuff."  And in the 1939 register, he was still a commercial traveller, so the patent didn't change his life much.

(In fact, he seems to have got the composition of Duralumin wrong - according to various websites, it was an alloy of 95% aluminium, and 4% copper, with the rest made up of manganese and magnesium, so "aluminium and manganese alloy" suggests that he wasn't very familiar with it.)

The patent was taken up (though I don't know when) by the firm of Stratton and Co., of Birmingham.  According to Grace's Guide, the company was set up in 1911 by George Abe Laughton, who at that time was running a small section of another company, selling coronation badges and flags. "Components were bought in from a small supplier who suffered from the ravages of alcohol and supplies were erratic. Laughton bought the business for £50 and acquired four hand presses and two girl workers. He named this enterprise Stratton, reputedly after the hero in a novel his wife was reading."   A nice story about the source of the company name, but in fact their eldest son, born 1906, was named George Stratton Laughton. So he might have been named for the hero of the novel, and the company named for him.  (And when he grew up and joined the family firm, he was known as Stratton Laughton, not George Laughton.)

By 1920 (again according to Grace's Guide) the company was making knitting needles, radio receivers and men's jewellery (an odd portfolio).  It then merged with Jarrett & Rainsford, the company that George Laughton had worked for until 1911, and became Jarrett, Rainsford and Laughton.  The Stratton name was kept for such things as powder compacts (vintage Stratton powder compacts are evidently very collectable) and of course Stratnoid knitting needles.

The earliest ad for Stratnoid needles and hooks that I have found dates from about 1925.  It features a testimonial from a customer: "JUST IMAGINE MY DELIGHT when I discovered 'STRATNOID' -- so light, soft as silk, and never discoloured my white wool as aluminium ones did.  I have several sizes in 'STRATNOID' and they are JUST PERFECT."


The brand continued to at least the late 1950s. In 1955, an ad listed the  "points of appeal about Stratnoid Knitting Pins":

The last point seems a bit of a stretch, but all the others seem valid.  (The head couldn't come off because it was made in one piece with the rest of the needle, I believe, unlike some of the anodised aluminium needles.)

Here's another ad, from 1958.  At that time, the company often offered free knitting patterns in their ads - if you bought a pair of Stratnoid knitting needles, you could send off for a free pattern.


And after that, the ads seem to have stopped (if I see a later one, I'll add it.)  But the needles have carried on - as Harry Lilley's patent application didn't say, they are very durable.  (Though we have had several rejects in the KCG collection that were slightly bent.)  I've tried knitting with them, and if you like very smooth needles, these are ideal.  Though I might not go so far as to say "JUST PERFECT", like the 1925 ad.
Posted by Barbara at 10:10