Print o' the Wave, But Not Quite

As I said in a recent post about the Print o' the Wave lace pattern, I've been researching its history, and along the way I've been looking out for examples of it in use, outside Shetland.  I haven't found many, so far, but I did spot a few from the 1930s and 1940s, from the Patons archive.

In fact, they aren't quite the standard Print o' the Wave pattern as used in Shetland.  As well as the zizag openwork panels and the part that I think of as seaweed fronds, there is another panel of plain stocking stitch, which is pulled into a zigzag by the rest of the pattern.   I should I suppose  knit a swatch, but instead, here is a close-up from a another pattern I found - for a twinset, in Woman magazine from 1948. 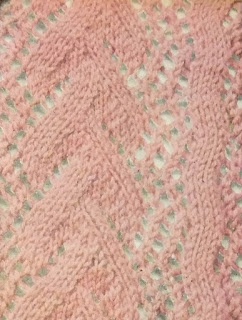 (I spent a day at the British library recently, reading copies of Woman and Woman and Home from the 1940s.  Fascinating!  I'll write some blog posts about it.  Some time.)

Back to the 1930s.  The Lady's Jumper (the design is called Brenda) has a square neck - a good choice for a complicated lace pattern like Print o' the Wave.  It could be difficult to make a round neck look neat, when you have to fit the decreases into the lace pattern.  The sleeves have a long ribbed cuff, then there's an increase row, and then you knit straight to the top of the sleeve,  That's a common 30s sleeve shape (by which I really mean I've seen another one like it, to be honest...) but also it avoids having to fit sleeve increases into the lace pattern.  There is shaping at the top of the sleeve, but the pattern tells you how to do that, row by row, rather than just leaving it to the knitter.

The other pattern is a little girl's dress ('Joan' design - a very 1930s name), with the same variant of Print o' the Wave.  The skirt is just two straight pieces of lace, followed by a lot of decreasing to gather the skirt onto the bodice, which is in moss stitch.  It's a very pretty dress.


I have been assuming that the lace patterns in these designs were based on the Shetland Print o' the Wave stitch, but I suppose it might not have been. Because where did Print o' the Wave come from?  A friend showed me Nancy Bush's book on Estonian knitting last week, and there are several stitch patterns there that are like Print o' the Wave - the names all seem to have 'twig pattern' in the title (but in Estonian, obviously).   Here's a link to a free pattern for an Estonian lace shawl that has a twig pattern in it - and it does look similar to Print o' the Wave, with added nupps.   So perhaps the Patons & Baldwins designer got the idea from a Shetland shawl, or perhaps it came from a different tradition altogether.  I don't know.
Posted by Barbara at 09:05