I haven't written anything for a while, because we've been on holiday in Naples.  Actually, we got back over a week ago but it takes me some time to get myself back on track after a holiday.

The plan was to visit Pompeii, Herculaneum and other Roman sites from Naples, by train, and that worked out very well.  We started with a day in the Archaeology Museum in Naples, where a lot of the finds from Pompeii and Herculaneum are kept - frescoes, mosaics, statues, ..... 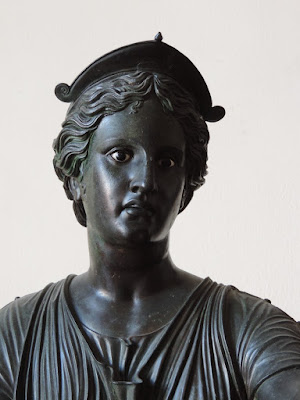 Here's a beautiful bronze statue of Diana as an archer, from Pompeii.  (I haven't shown the whole thing, because her left hand, holding the bow, is missing, and the gaping hole in her forearm grabs your attention.  If you can't see that her hand is missing, she looks as good as new, I think.)

Then we went to Pompeii itself.  There were crowds of people, but it's such a large site that it's easy to find quiet corners.

Here's a street sign.  The "REG VII INS IV" is modern, but the two men carrying an amphora is original - perhaps ancient Pompeiians gave directions like "Turn left at the amphora carriers." 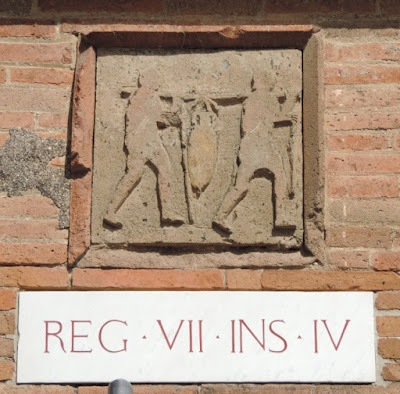 A lot of the frescos have been removed from the walls where they were found and moved to the museum, but some are still in situ, like this one in the House of Julius Polybius. 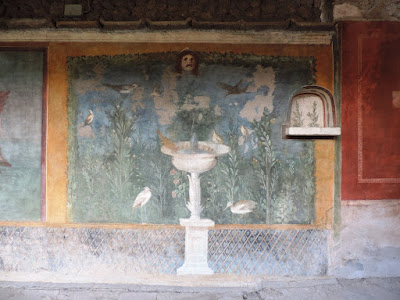 We went to one of the cemeteries outside the city walls  (because of John's interest in cemeteries of all kinds).  Here's a family mausoleum, with some of the portrait busts of the people buried there, still in their niches. 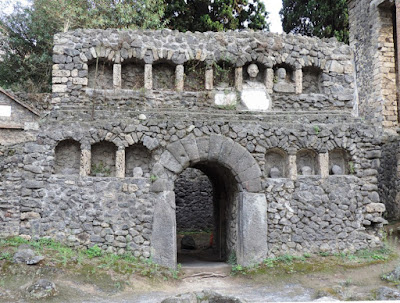 On another day we went to Herculaneum (modern Ercolano).  The upper floors of many buildings have survived there, and some of the wooden structures on the upper floor that project over the street. Here's one of the streets, with a colonnade either side.  The buildings at the top are in the modern town, so you  can see the thickness of the lava that buried the ancient buildings - and of course the people of Herculaneum. 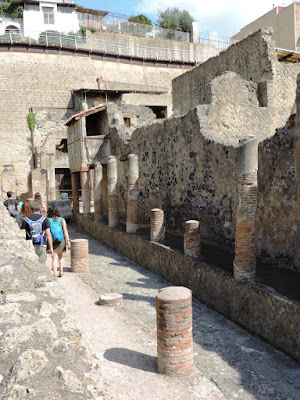 Even better in some ways, because less familiar, was Paestum, about 100km. south of Naples.   I knew that it has three wonderful Greek temples, roofless but otherwise fairly complete. The stone is a beautiful golden colour. 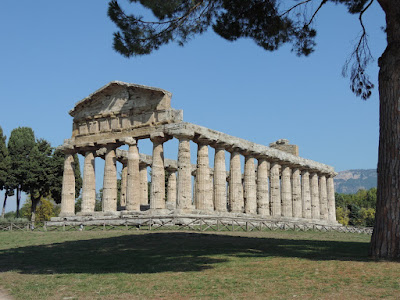 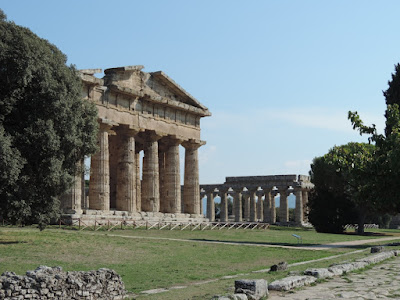 But there was a complete town as well as the temples, now mostly just small walls, and the objects that were found there are now in a museum, next to the site.  It has some wonderful things, including a collection of stone tomb panels, two rectangular panels and two gable ends for each tomb, all painted with scenes of banquets, chariot races, mourning, and so on.  They are beautifully drawn, and the colours look so fresh. 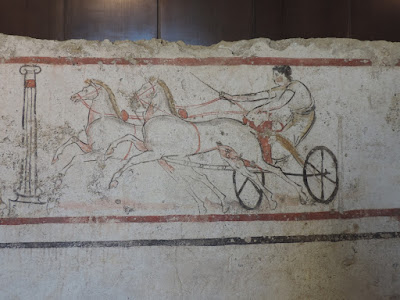 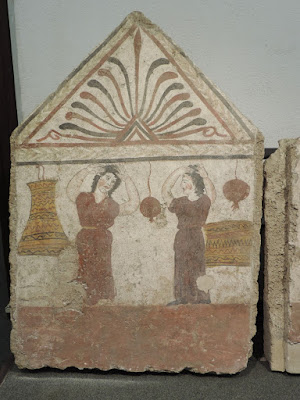 We spent time in Naples, too - a favourite site was the cloister of Santa Chiara, which has tiled columns and tiled benches alongside the paths, with scenes of rural life that are very charming. 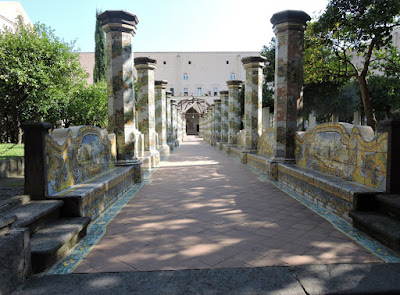 It is a cool, peaceful oasis away from the busy traffic of the city centre. 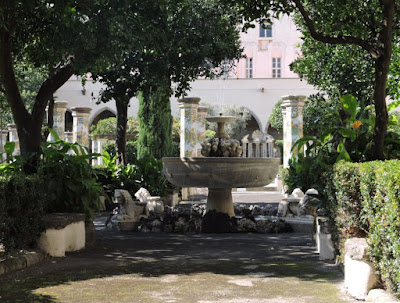 The weather was perfect - sunny, warm but not too hot.  And we had some very good meals - some pizzas, of course, but also very good fish. A great holiday.
Posted by Barbara at 09:00