Yesterday evening, I did a combination talk/trunk show on Canadian Knits for the Huddersfield Knitting & Crochet Guild branch.  Not all Canadian knits everywhere, ever, obviously, but focussing on Cowichan and Mary Maxim sweaters.

We have three sweaters in the Guild collection that came from the Coats archive, and I think must have been bought in British Columbia around 1950.  One is definitely a Cowichan sweater, and has a label to prove it. 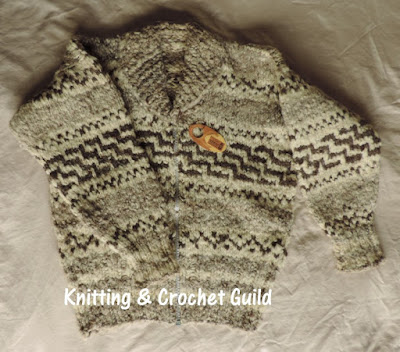 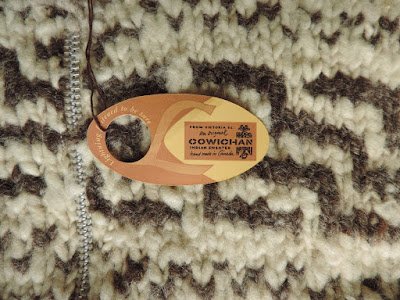 I really like this one - it's soft  and has an interestingly nubbly texture. Like all Cowichan sweaters, it's hand-knitted from handspun wool, in natural colours.  Also like all Cowichan sweaters, it is made without seams:  knitted back and forth, probably  on several straight needles, up to the armholes, fronts and back then knitted separately, and knitted together at the shoulder.  The sleeve stitches are picked up around the armholes, and the sleeves knitted downwards to the cuff.  The stitches for the shawl collar are picked up around the neck opening.  And following the Cowichan tradition, the colour not in use is woven in, rather than being stranded across on the wrong side as in Fair Isle knits.

Another Canadian sweater is also I'm sure Cowichan, though there is no label to say so in this case. 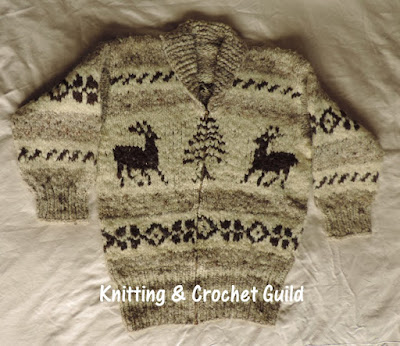 I like the deer (elk?) and pine tree design, but the fit is a bit odd on this one - it's very long, and very narrow around the bottom edge.

These sweaters were probably acquired by Patons & Baldwins as possible inspiration for their own designs, presumably under the direction of James Norbury who was the P&B chief designer at the time. James Norbury also had a BBC TV series on knitting, in the 1950s, and BBC Radio 4 included a still from one of his programmes (at least I assume that's what it is) in March this year. 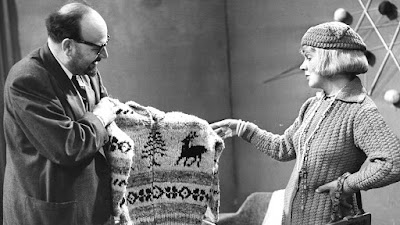 And it shows the Guild's sweater!  (I tried to get more information from the BBC, but didn't get a reply.)

In 1953, Patons & Baldwins issued a pattern based on the sweater, in a booklet of Moorland Handknits, calling it a "North American Indian coat". 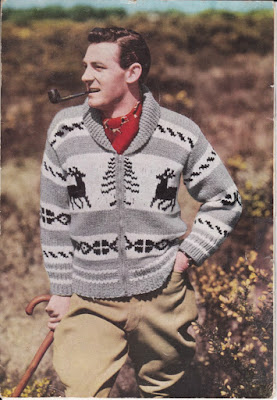 Moorland was a DK weight wool, so to get it thick enough, the pattern specified using three strands together.  (Later on, about 1960, when Patons started to sell a chunky yarn, the pattern was re-issued.)

Our third sweater from British Columbia was made by a Semiahmoo knitter - the Semiahmoo, like the Cowichans, are Coast Salish people. 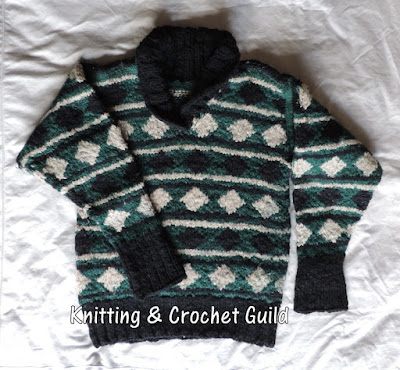 It's interesting that this one uses dyed yarn (the green and possibly the black).  But it doesn't feel as nice as the others - it's very stiff and a bit harsh.

I'll maybe say something about Mary Maxim another time.  But now I'm off to Blackpool!
Posted by Barbara at 14:34