A Feather in your Cap

In yesterday's post, I said that although most of the patterns in the collection just donated are from the 1970s or later, there are a few much older ones.  The oldest is a Patons & Baldwins leaflet from the 1930s for three knitted hats and a scarf, in very good condition.  The designs are called Nina, Norma and Nesta - P&B liked to stick to the same initials for the designs in a leaflet. 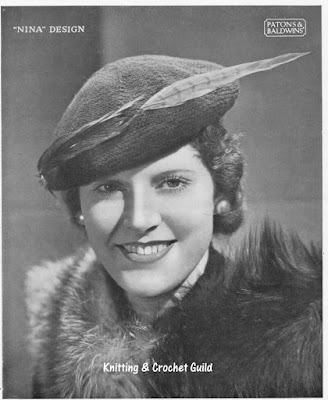 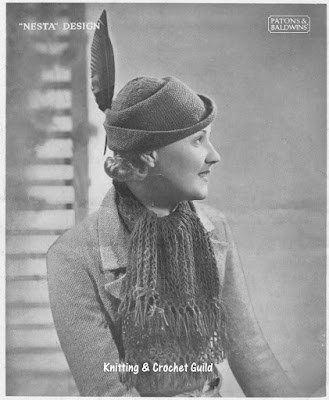 The hats are all very simple knits, on two needles.  The 'Nina' beret, which has the most complicated shaping, is in garter stitch, 'Norma' (on the cover) is in fisherman's rib, or something like that, and 'Nesta' is in moss stitch.  (The scarf in the 'Nesta' design is in a loose lacy stitch.)  The most complicated part is folding the Norma and Nesta hats so that they look like the illustrations, and the leaflet gives instructions for that, and for placing the feather in all three.   Evidently, P&B wanted to show, or to claim at least, that even in a simple woolly hat you could look smart and fashionable if you were sufficiently well-groomed and made up, and wore your hat with panache.  (I had a vague feeling that "with panache" literally means something like "with a feather". And I was right, so there you are.  Just stick a feather in your hat, pluck your eyebrows severely, and you too might look like a 1930s lady.)
Posted by Barbara at 20:37