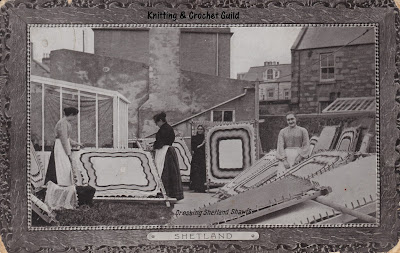 I have just bought a copy of Kate Davies' The Book of Haps, a luscious book.  It has essays on the history of Shetland haps, and new shawl patterns from 13 designers (if I can count).  I'll write more about it later - not this week, as we have a handling day at Lee Mills on Friday, for Guild members attending the annual Convention in Sheffield, and then I'll be at the Convention myself.  But for now,  I'll write about the image of women dressing Shetland shawls, stretching them out on the special frames.  It's used in the book to head Roslyn Chapman's Documenting Haps and the image credit says that it's from a postcard.

We have a similar postcard in the Guild collection, which was sent from Lerwick on 10th May 1911. It was sent to Mr David Thomson, West High Street, Buckhaven, Fifeshire, and the message is also signed D. Thomson, so it might have been from a son to his father.  The message is in pencil, and not very easy to read, but says something like:


Just a PC to let you know that we have not been off yet and i don't think we will be off this week.... (2 words illegible)  Buyers are hanging back the herrings are only 4/- the (to?) 7/- per cran so it does not pay to catch them  we might shift from here at any time for 2 or 3 weeks but we don't (know?) where. the most of the boats are all lying here waiting for the month off June the herring they have been getting ... (3 words illegible) herring so they are no good for curing  You might send the (illegible)  From D Thomson.

I knew that 'cran' is a quantity of herring from the line "With a hundred cran of the silver darlings" from Ewan McColl's song Shoals of Herring, though I had to look up what it means exactly: "A measure of fresh herrings, equivalent to 37½ gallons".  A lot of fish.  4/- means 4 shillings, and there were 20 shillings to a pound:  it doesn't sound much for such a quantity of fish, and evidently wasn't enough, from the postcard.

D Thomson, the sender of the postcard must have been a fisherman, presumably based in Buckhaven, but temporarily waiting in Lerwick for fishing conditions to improve.  His postcard home is a wonderful piece of history, linking fishing and knitting - traditional ways of earning money in Shetland.
Posted by Barbara at 12:51