The Face of the Fifties

For me, the face of the 1950s is the face of Woman's Weekly in the 1950s.   My Grandma bought the magazine every week, and once I could read, I used to look through it and try to make sense of it.  I was mainly interested in the knitting patterns for twin dolls, and Grandma made some of them for me, but the rest of it - The Man Who Sees, Mary Marryat, the Robin family - was a bit baffling.   I have met 1950s copies again since I started sorting out the publications in the Knitting & Crochet Guild collection.  We don't have a complete collection by any means - it would be enormous.  But knitting has been an important component of Woman's Weekly magazine for a long time, and certainly was in the 1950s, so it deserves a place in the collection.

One model appears on the cover of the 1950s Woman's Weekly very frequently, and I think of her as the face of the magazine at that time. She was very slim and elegant, with very neat and carefully arranged hair.

In fact, I know from the copies in the collection that she started modelling in the 1940s, and appeared on Woman's Weekly covers then, though I think not so often as in the 1950s. She apparently had much longer hair then, and wore it in one of those complicated constructions that remind me of a mediaeval head-dress. (And I do wonder how they managed to make their hair stay put, in the days before sophisticated hair product. Lots of hair-pins, I suppose.)

She also did some modelling for Bestway and Weldon's pattern leaflets, which  like Woman's Weekly were published by the Amalgamated Press, Ltd.

Altogether, hers is a very familiar face.  She appeared in Woman's Weekly throughout the 1950s - I have seen her on a 1959 issue.  But I didn't know her name.  Models appearing in weekly magazines were not usually famous, unlike Kate Moss and other super-models.

Then last year, Woman's Weekly published a series, "A Vintage View", based on their archives. There was one issue for each decade of the 20th century since 1911, when the magazine started, and of course my anonymous model featured significantly in the 1950s issue.  And amazingly, I now know who she was; here's the caption to one of the covers that she appeared on:


"A favourite face  Model Patricia Squires often featured on our covers.  She was married with a son and had a nanny so she could continue working."

It must have been very unusual for a woman in the 1950s to pay for child-care so that she could continue to work.  I am really pleased to be able to put a name to the face. 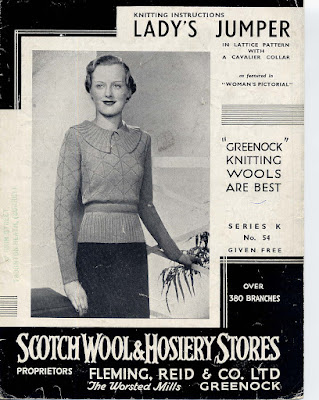