I am, you may have noticed, interested in old knitting patterns.  A sub-category of vintage patterns that I find particularly fascinating are those that are based on still earlier patterns.  Sometimes spinners just revise and reissue an earlier pattern, without mentioning that it has been previously published - that's noteworthy, because it suggests that the first pattern must have sold very well (the Sirdar pattern based on a doiley, for instance, that was revised at least twice - I showed the reissued patterns here.)

But sometimes spinners explicitly say that the patterns are updated from an earlier decade, and  use the 'vintage' idea to sell the new patterns - an example is the Patons All Time Greats booklet from 1974.

As the subtitle says, the booklet has 11 designs from the 30s to the 50s that first appeared in Patons publications or in Stitchcraft magazine (which was published by Patons).  The booklet has small black-and-white photos of the original designs, and on the whole, the updated designs follow the originals faithfully.  An obvious exception is that a couple of the 1940s designs had the very gathered sleeve tops that were typical of the time, and these are not copied in 1974.   For instance in the 1940s version of the very pretty "Just a Bunch of Cherries" sweater, the tops of the sleeves stick up well above the shoulder line - a smoother profile was favoured in 1974, and indeed would be today.


In a few cases, I can recognise the original design (and in theory I could identify them all - they will be in the Knitting & Crochet Guild collection, but  I haven't had time to search yet).  One is the Fair Isle pullover from the Stitchcraft Men's Book published in the late 1940s. 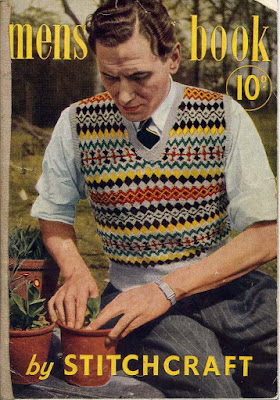 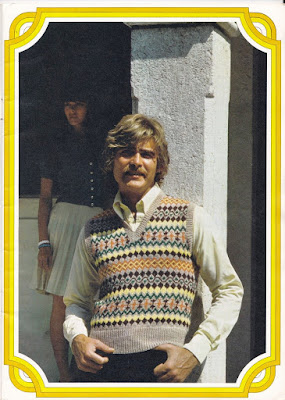 The 1974 version is a close copy of the original, though the colours are more muted - the main difference between the two models is in the hairstyles (which both now look very dated).  Fair Isle knits were very popular in the late 1940s, and had a revival in the 1970s, as I remember. I knitted several Fair Isles myself then, including a pullover for my husband (though by then it was the early 80s) that I showed here.

One of the designs in All Time Greats, for a twinset, is not in fact based on an earlier design.  The introduction says: "This lively presentation brings up-to-date the many designs that have appeared in Patons leaflets over the years.  Today the twinset branches out into the separates story - sweater goes sleeveless to wear sometimes on its own or to wear over a blouse . . . or matching raglan cardigan is there when required . . . texture is ribbed and clingy".  To me, the result looks unmistakeably 1970s rather than any earlier - twinsets with sleeveless sweaters were very new and popular then.  Often the sweater would be waist-length and the cardigan much longer.  I had one like that (bought, not hand-knitted) that I thought I looked very smart in, that I wore with a midi-skirt in about 1972. 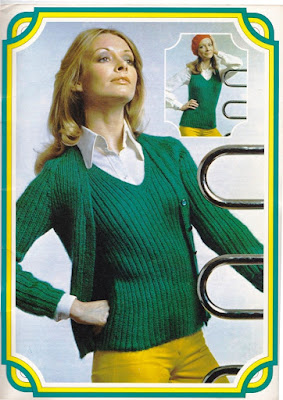 The twinset shows one of the things I find fascinating about 'vintage vintage' - sometimes a design that is trying to evoke an earlier time ends up looking very much of its own time. Or sometimes, a few details have to be changed to make a vintage design fit into mainstream fashion - the bright colours of the 1940s Fair Isle, for instance.  Spotting the difference tells you something about what "Fair Isle" meant in the 1940s and 1970s:  in the 1940s, it was about bright colours after years of war-time drabness, in the 1970s it was about tradition, nature and the countryside.  And of course, simply by selecting just a few of the huge number of designs open to them from the 1930s to 1950s, the Patons designers in 1974 were choosing what would fit in with 1970s fashion.

I think many of the designs look equally good today - the lacy sweater below is I think my favourite.  Members of the Knitting & Crochet Guild can download All Time Greats from the members' section of the Guild website, for personal use, along with many other publications from the collection that I am gradually uploading - you'll also find the Stitchcraft Men's Book there. 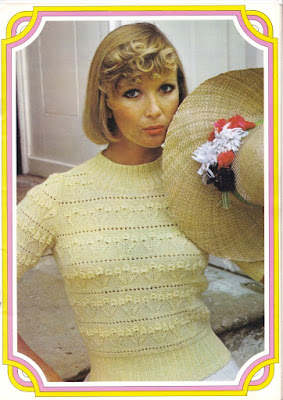