Willow Pattern and Others

This week, we were sorting more patterns leaflets in the Knitting & Crochet Guild collection - this time a batch of Sirdar patterns from the early 1980s.  Several of them caught my eye, for one reason or another.  The first was a sweater with a Willow Pattern scene on the front - picture sweaters were very popular at the time.  (I love the knitting needles stuck at random into the model's hair, to give an Oriental effect.  Although the big hairpins are a Japanese Geisha thing, and the Willow Pattern is supposedly Chinese, but actually an English invention, according to Wikipedia....  Never mind.)

I noticed this one particularly, because we have a sweater with the same design in the collection.  The sweater is machine knitted, though it is not a machine knitting pattern. 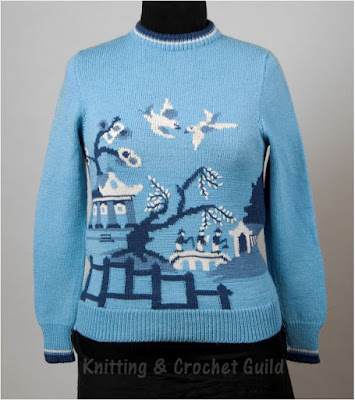 ,
And now that we can see the leaflet and the sweater side by side, it's evident that the design has been reflected - presumably that happened in the process of translating it for machine knitting.  (I know nothing about machine knitting, so I don't know how that would be done.)

It's always very gratifying when we match up an item in the collection with a published pattern - it fills in a bit of the history of the item that we didn't previously know.

Another picture sweater was very noticeable - the design has a tree with sweethearts' names on it. The sweater on the cover has 'Charles' and 'Diana' on it, although the leaflet helpfully says "Adaptable to your own romance".


Part of knitting folklore is that if you knit your boyfriend a sweater, it will lead to a break up.  (See the article about the Sweater Curse in Wikipedia.)  I think that if you knitted yourself a sweater with your boyfriend's name on the front, the relationship would be equally doomed.  However, the sweater might be retrievable - the names are done in Swiss darning, so you could in theory change his name for another one.  Thus leading to an unending series of doomed romances?  Hmmm.

A more traditional design also appears to date from the time of Charles and Diana's marriage -  a Fair Isle style, with some bands imitating traditional patterns, and then one with hearts and initials 'C' and 'D', and another with crowns.  Again, I think you would want to do the initials in Swiss darning, in this case to avoid knitting with three colours in one row and some very long floats across the back of the work, though the leaflet does not suggest that.

And finally, there was a lacy top that I recognised as a re-issue of a design originally published in 1952 - I wrote about the 1952 leaflet here.  It had evidently been a very popular design, and featured in a British Pathe film showing Sirdar designs from 1952.   In the 1970s, it was updated for slightly thicker yarn (4-ply rather than 3-ply) and published as Sirdar leaflet 5193. And the same design reappeared in the early 1980s batch we were sorting this week.    I have never seen any version knitted up, but I imagine it could still work well.