I have just been away at the Knitting & Crochet Guild annual convention, held this year in Sheffield.  We were staying at Endcliffe village, in University of Sheffield student accommodation.  It was very quiet (most of the students had gone), and the grounds are very green, with mature trees around the modern buildings. 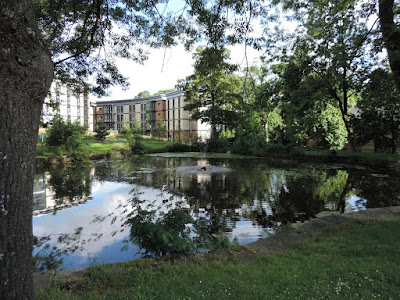 It was a very good weekend - interesting talks and workshops, catching up with people met at previous conventions, seeing new faces.  Seeing some of the beautiful things that have been made in the past year.  Talking (a lot).  Knitting (a lot).

I went to two workshops over the weekend, one by Louise Walker of Sincerely Louise,who also gave a talk on Faux Taxidermy the subject of her forthcoming book. If you want to knit a tiger-skin rug, or a knitted triceratops head on your wall, Louise is your woman.  Her workshop was on Photographing your Knits - lots of useful information about the importance of lighting, and making best use of the facilities of your camera.  As a result, I've discovered several options on my camera that I didn't know were there, and I an definitely going to buy a proper photographic background.  Hopefully, future images in this blog will be better as a result.

The other workshop, by Judy Jones, was Knitting & Crochet for More than Two Hands, aka Sociable Knitting (or Sociable Crochet).  We worked in groups of four, each group working on a square blanket, either crocheted or knitted.  Judy had brought along two part-knitted blankets, one of which had been worked sociably several times before.  The other, which I was working on, started off as just a plain square, about 12 inches on each side, that Judy had made for us.   Each knitter has their own ball of yarn, and two knitters opposite each other do two increases at each corner, while the other two just knit. So when everyone has knitted one round, four rounds have been knitted altogether, and there are 16 more stitches on the needles. 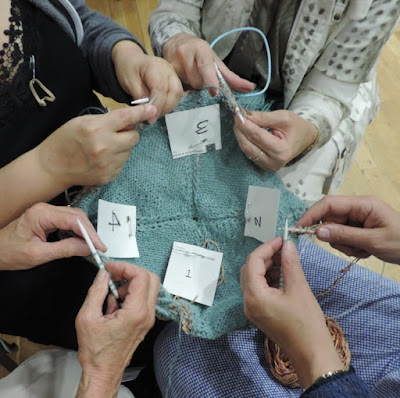 Our little square was quite tricky to work on at first - we  were working very close together and there wasn't a lot of room for four pairs of hands. but by the end of the workshop, it was quite a bit bigger and easier to work. 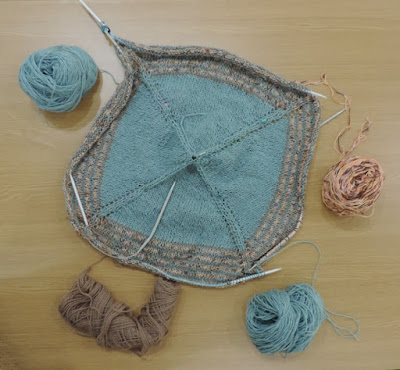 It's a very sociable activity, and very satisfying because, of course, the square grows four times as fast as if you were working on your own. 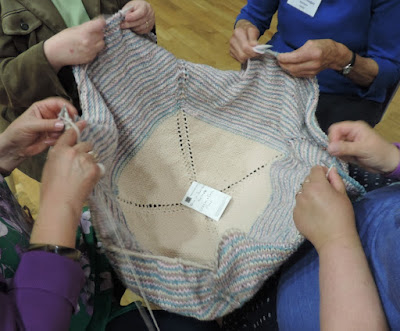 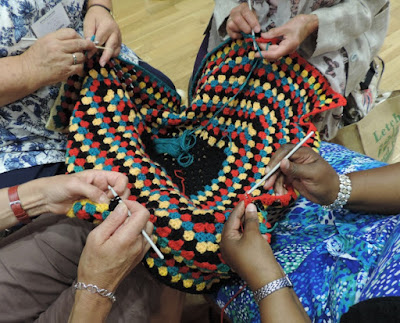 .
It would be a great activity for Knit in Public Day - other Guild members were fascinated to see what we were doing, so it would attract a lot of attention.
Posted by Barbara at 16:59