I haven't mentioned what I've been knitting for a while, although I have several projects almost finished.  I don't generally like to talk about my knitting before it's actually finished, partly because it might go wrong, and that would be embarrassing, and partly because I am very bad at finishing knitting projects (I hate sewing up, for one thing), so I might have to report that I've finished something a long time after I've said I'm knitting it, and that would be embarrassing too.

But here's something I have just finished, apart from sewing in ends, etc.  It's a very unseasonal cabled scarf, in Wendy Merino DK.   More about it later. 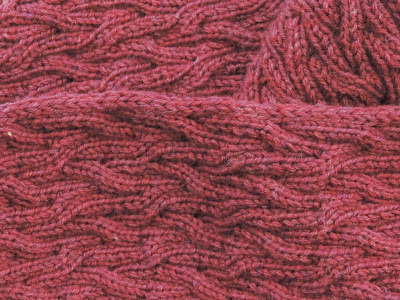