We got back from a holiday in Greece ten days ago - it's taken me this long to get around to writing this blog.  As with last year's holiday in the Peloponnese, we went with friends from our walking group, and it was organised by Gareth Trewartha of Naturally Greece.  This year we flew to Thessaloniki and visited areas in northern Greece - Lake Kerkini, the Prespa lakes, and the Zagori region.

We saw lots of water birds on the lakes - pelicans, several kinds of heron, egrets, flamingos, cormorants.  There were storks nesting on platforms on the tops of electricity poles (at least 9 of them along the road through Kerkini village).  And we saw a cuckoo, which was thrilling.

There were wild flowers too: a damp meadow full of pheasant's eye (Narcissus poeticus), the sinister-looking silkvine alongside Lake Kerkini.

Zagori is a limestone area, so especially rich in wild flowers and we saw lots of orchids there.


We spent a couple of days around the Vikos Gorge, where the scenery is spectacular and the villages are charming.  The river running through the gorge is the Voidomatis - in places the water looks a brilliant turquoise.


The Zagori houses have a gate onto the road with its own roof - some are new or have been restored, but many look very ancient.


I liked the chimneys - they look like little houses or temples, and often have a conical stone on top.  The roofs are made of stone, too. 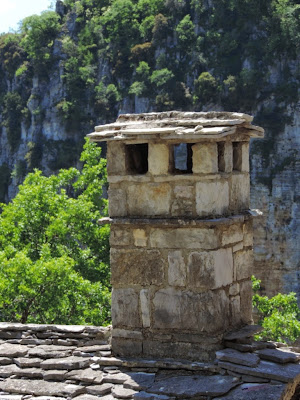 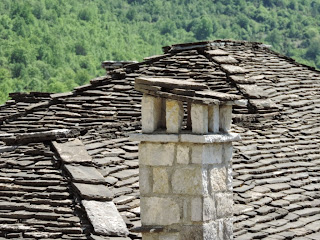 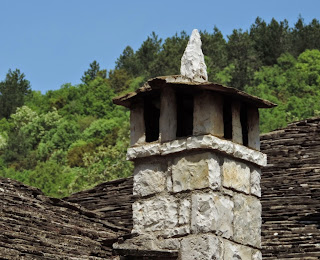 The villages in Zagori were linked by paved tracks, and local benefactors built bridges to take the tracks over the rivers. We crossed several very graceful examples, including the wonderful three-arched bridge near the village of Kipoi, where we stayed.

At the end of the holiday, when the rest of the group flew home, John and I stayed on for a few days in Thessaloniki.  We had been to Vergina, where the royal tombs of Philip of Macedon (father of Alexander the Great) and several other members of his family had been excavated.  The contents of the tombs used to be in the archaeology museum in Thessaloniki, but now they have been moved back to a new museum in Vergina.  The finds are amazing - wonderful gold wreaths, silver dinner services, huge bronze vessels, Philip's armour.  I assumed that the gold in particular was a sign of royalty, but the Thessaloniki Archaeology Museum has lots of gold wreaths from graves across the region -  obviously you had to be wealthy to be buried with a gold wreath, but not necessarily royal.  They are beautifully made, too - very delicate and intricate.   Many imitate wreaths of plants like myrtle or ivy, and the details of the flowers and leaves are perfectly reproduced.

It was a really good holiday, very well-organised, and I haven't even mentioned all the food we ate - delicious, and lots of it.  We had a wonderful time.