Needlework for All - Christmas 1914 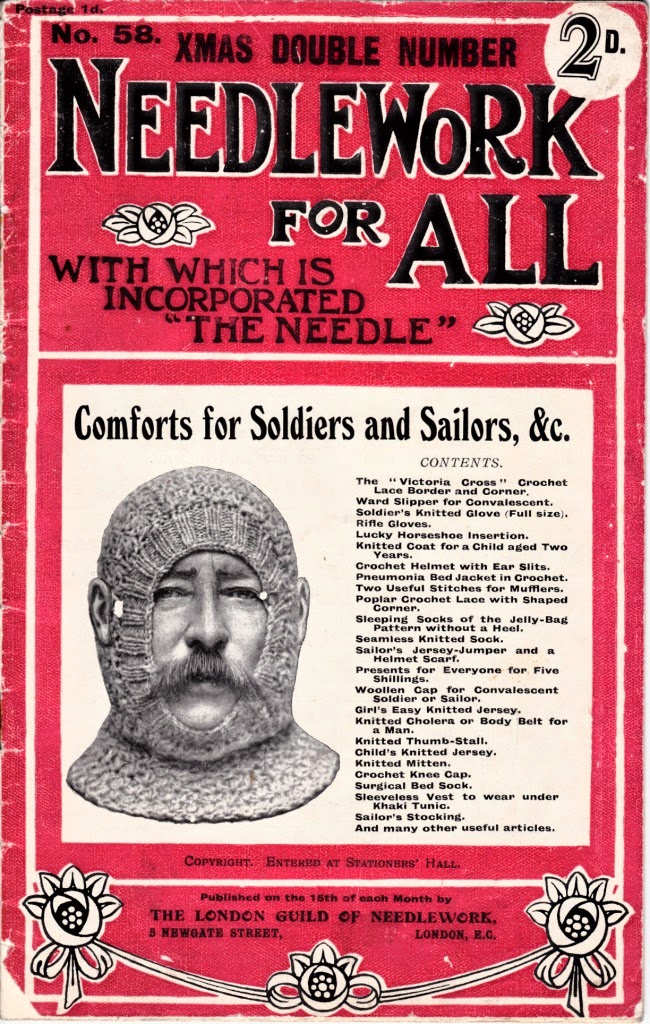 Happy New Year to everyone!  I intended to write this post nearer to Christmas 2014, but missed.  But it's not Twelfth Night yet, so it's still the Christmas season...

Needlework for All was a monthly magazine, started in 1909, and there are several issues, including the Christmas 1914 double number, in the Knitting & Crochet Guild collection.  Like other needlecraft magazines being published at the start of the war, it emphasised 'fancy work', especially crochet.   But in late 1914, many of these magazines included patterns for making comforts for the troops, and the Christmas 1914 Needlework for All has "Comforts for Soldiers and Sailors, &c." as a subtitle to reflect that.  (In fact, I think that after this issue, the magazine pretty much reverted to fancy work - they appear to have decided that they'd done comforts, and didn't need to do any more.)

The first page of the magazine introduces the contents:


Christmas and the New Year come to us in this season of 1914 very differently, alas! to their wont.  But yet, with the war-clouds overshadowing their brightness, the old traditions still cling close, and there is the longing, deep ingrained in the hearts of most of us, to express the Christmas feelings of goodwill by the giving of presents.  The gifts which everyone has in mind before any others are those that will take the form of some comfort for the sailors and soldiers—and who is there that has not among the Forces of the King someone near and dear for whom the thinking and making of comforts is some relief to the anxious thoughts that will come?
Ever since the War broke out our little Magazine has set itself to the best of its ability to the task of helping by suggestions and instructions towards the working of practical additions to the kit of the sailors in their weary and anxious task of watching and waiting, for the soldiers in their warfare at the front, or their work in the training camps, and for the wounded and sick who have come home so quickly, thanks to the wonderful organisation for their rapid transit; nor have suggestions been overlooked for the making of warm garments for the refugees from that heroic little Belgium, or for winter comforts for the children of the sailors and soldiers whose Christmas will be such a sad one this year.

The editor then goes on to congratulate the magazine on having done such a good job already that the previous "War Numbers" that included patterns for comforts had completely sold out - and readers had found the patterns "completely satisfactory, and easy to carry out".   So the Christmas issue includes reprints of several of the earlier patterns.

More on the comforts later.  But fancy work has not been forgotten:


No pains have been spared, however, to make our first Christmas Number as complete and comprehensive as possible.  While catering for the universal demands in connection with the War, due provision has not been omitted for those workers who have leisure or, happily, enough ease of mind to allow themselves the relaxation of fancy work.

Filet crochet was very popular for fancy work, and the magazine includes two filet crochet designs, an edging and an insertion, which could be used for trimming tablecloths, etc., one with a military theme:


The Victoria Cross Crochet Lace is a design that will have very special interest, even in the brighter days to which we so earnestly look forward when the immediate cause of its inspiration shall have passed away. 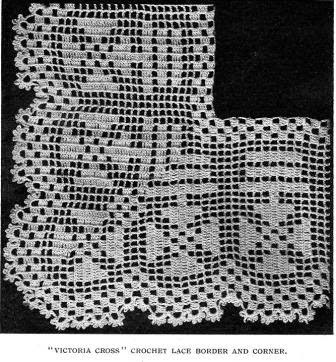 The editor goes on:


there are hints as to the making of all kinds of useful knick-knacks of the inexpensive order, which specially meets the scale of present-giving of this season, and there are dainty little garments for children in knitting and crochet which will do duty for Yuletide souvenirs in the most attractive manner.

One of the children's garments is a very practical-looking knitted jersey for a boy of five, and could not be described as a 'dainty little garment', by any stretch, but perhaps the editor was not much acquainted with five-year-old boys.

The comforts for soldiers and sailors include, of course, the helmet illustrated on the front cover.  It is crocheted, except for the knitted rib around the face, and incorporates ear slits.   I think that helmets were not official issue, and so there is no standard pattern, and a great variety in the helmet designs that were published.

There is also a rifle glove, that leaves the thumb and first finger uncovered.


And there is a pattern for a cholera belt (or body belt), thought by many people to be absolutely essential for keeping the abdomen warm, and the soldier in good health. There had been an appeal earlier for 300,000 body belts, which had been sent to the troops in France early in November, and many knitters would by this time have been very familiar with them. 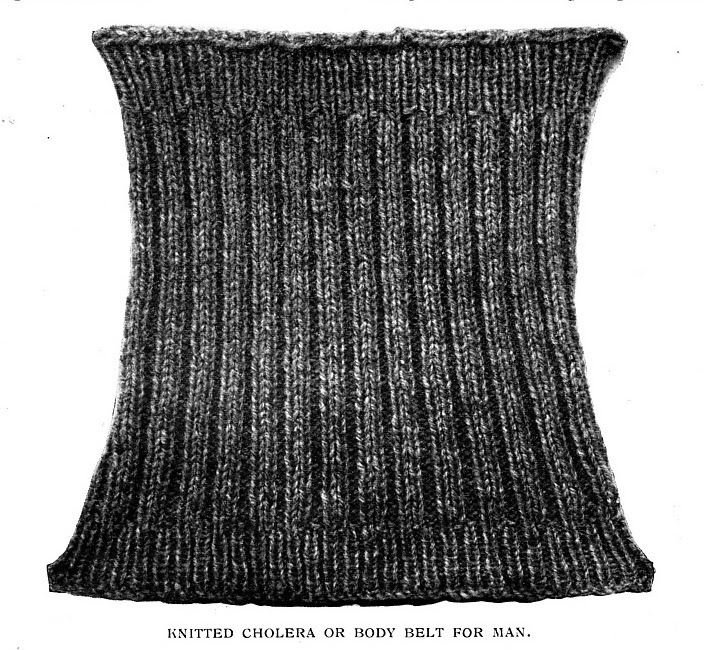 As the editor  mentions in the introduction,  there are several things in the magazine to make for the sick and wounded, who of course had been coming back from France in large numbers.  There is an odd selection:  some have very specific medical uses, such as a knitted eye bandage and a knitted thumb-stall.  Not the appropriate sort of thing for volunteers to be knitting, without a specific request from a hospital, surely?

Altogether, the magazine gives a slightly unsettling view of the activities of its readers at this stage of the war - making a fairly random selection of comforts for the troops, but then going back to the more familiar 'fancy work', making decorative articles for the home, and garments for children.

Members of the Knitting & Crochet Guild can download a copy of this issue of Needlework for All , along with other First World War magazines - more will follow.
Posted by Barbara at 17:19