I was in London on Saturday for the Knitting History Forum conference - I've been busy ever since, so this post about it is later than I intended.

The conference was at the London College of Fashion, off Oxford Street.  There was a diverse programme of talks, beginning with Angharad Thomas talking about her researches into the history of two-colour patterned gloves, leading up to the Sanquhar and Yorkshire Dales gloves that she is particularly interested in - see her most recent blog post about Sanquhar gloves, Glove Heaven.  Tom van Deijnen (aka Tom of Holland) talked about his Visible Mending Programme and showed the cardigan in the Knitting & Crochet Guild collection that he mended for us a few months ago - I wrote about that here.

I had not met Amy Twigger Holroyd before, though I had seen some of her work the previous day at the Fashion & Textile Museum's Knitwear exhibition - more on that later, possibly.  She talked about her Keep and Share programme  and brought along some of the things that she has made, or re-made, in that programme.  (And she was wearing a very nice cardigan that I recognised later in her on-line store.)   She passed around some of the pieces that she has worked on - commercial knits that she has re-worked into something special, including some 'stitch-hacked' pieces where a plain piece of stocking stitch has been converted into an embossed design in reverse stocking stitch on a stocking stitch background. As every stitch in the area she is working on has to be redone by hand individually, it is painstaking, slow work, but the results are amazing. She passed around a fine-knit vest that she has stitch-hacked - the images are from here.


The last two talks were on  war-time knitting - I gave a repeat of my talk "Useful Work for Anxious Fingers', on Knitting & Crochet in the First World War 1, that I gave at the Knitting & Crochet Guild convention in July.  This time, I showed the crochet handbag that I made to a Woman's Weekly pattern from 1917. 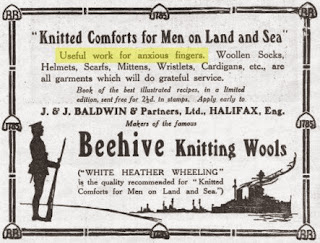 And finally Joyce Meader of The Historic Knit showed a selection of garments for soldiers and sailors that she has knitted, following original knitting patterns from the Crimean War onwards.  She had brought some of the pattern booklets, and passed them around.   There were several different versions of a Balaclava helmet, socks, pullovers, sweaters, and so on.  Some odd ones, like knitted puttees, which I think may have been intended as leg-warmers to wear on chilly nights when the days were hot, e.g. in Mesopotamia.


An enlightening and enlivening afternoon.  (Although battling afterwards along a thronged Oxford Street in the rain was not much fun.)