I hadn't seen, or even heard of, a rug wool gauge until friends gave me one a couple of weeks ago,  and now I've seen another - or rather a drawing of one in use. (Of course, I probably wouldn't have noticed the drawing if I didn't already have a rug wool gauge, so it's not really an amazing coincidence.) 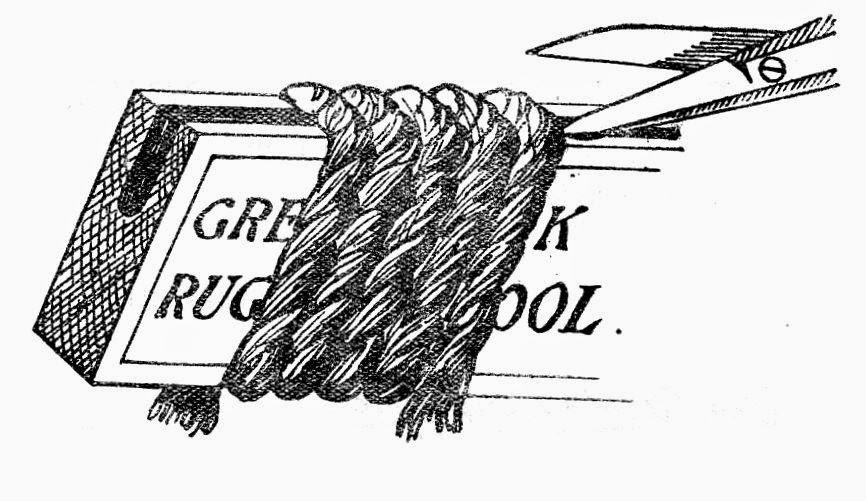 The drawing is from the Hand Book on Knitting and Crocheting published by the Scotch Wool & Hosiery Stores.  We were looking through the copies of the Hand Book in the Guild collection at Lee Mills the other day, trying to make sense of them.  They are all undated, but evidently there were quite a few different editions.  (They don't have edition numbers either.)   The drawing is from an edition that I think must have been published during the First World War, because there are several patterns for knitted comforts for the Army and Navy.

The booklet has a section in the booklet on Rug and Mat Making, using (as it says on the gauge) Greenock Rug Wool.   The company used the brand name 'Greenock' for its knitting and rug wools - the mill was at Greenock in Scotland.  You could buy the wool, the gauge, a special hook, and canvas in various sizes.   The canvas was not printed with a design, though, as was common later, and the booklet does not give any charts - you had to make up your own design, or (more likely) make a plain rug.

My Patons & Baldwins rug wool gauge is much later than this one, and I thought that such things were only in use from the 1930s to the 1950s, roughly, so it's interesting to see the history pushed back to the 1910s.