I've realised that I haven't written anything about my own knitting for a long time, though I have been working on several things, and just finished a very nice cardigan which I will write about shortly.  And I started and finished a quick project back in June that I have never mentioned.  I should, if only because it illustrates how useful Ravelry is. 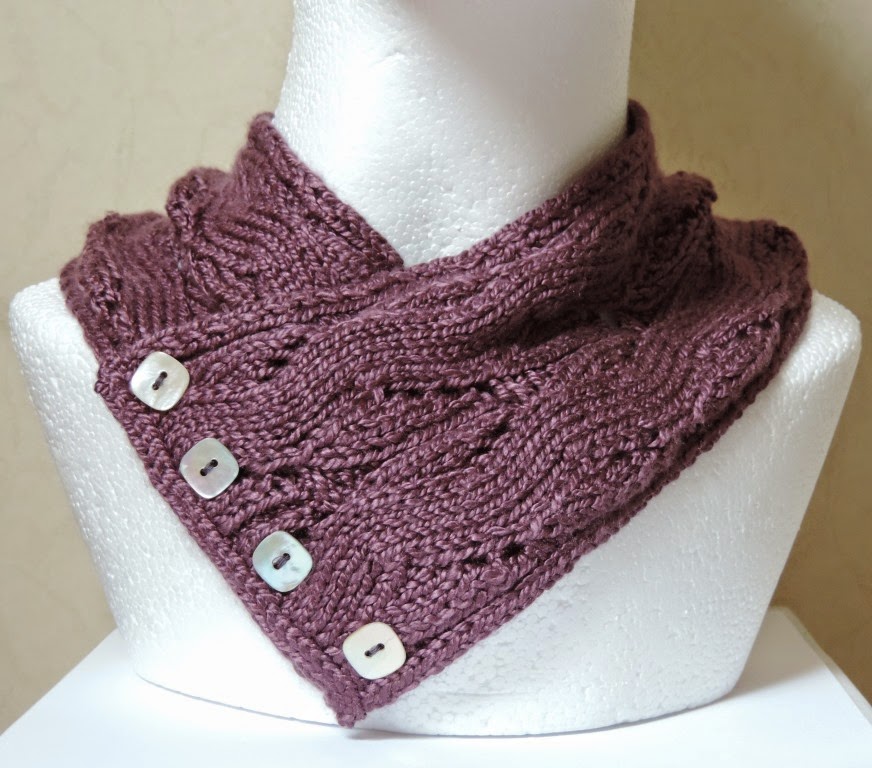 Several years ago (in 2009, I think) I went to a free event at the Oxfam bookshop in Huddersfield.  Two of the Rowan designers came to talk about the history of Rowan, the process of putting together a collection of designs for the biannual magazine, etc. There were about 12 of us in the audience, and none of us had brought any knitting with us. (I hadn't been knitting again for very long, and wasn't used to knitting in public - now, I would definitely take along some knitting to a talk about knitting.)   But the Rowan people were prepared - they had brought along pairs of knitting needles and a large basket of odd balls of yarn, so that we could all knit a swatch while we were listening.

At the end of the talk, they retrieved the knitting needles, but said we could keep the yarn - and we could help ourselves to anything else in the basket, too.   So I came home with several balls of yarn, mostly purples and greens.  I used one, a ball of Rowan Felted Tweed DK in green, in a Louisa Harding design, Old Moor, which called for one ball of a contrasting colour.  But I haven't yet found a use for the others.

The most delectable was a ball of pure silk DK in a rich purple, by Jaeger.  (Jaeger Handknitting was owned by Coats, as is Rowan.)  It had a gorgeous feel, very soft and smooth - in fact, very silky indeed.  But I couldn't think what to do with - after all, what can you do with one ball of silk yarn?

But then, in June, we were going to London to visit friends, and I needed a small portable project to knit on the train.  I thought again of the Jaeger pure silk,  and this time posed the question more positively:   what can you do with one ball of DK yarn, 125m. long?   And this is exactly the sort of question that you can ask in Ravelry, through the advanced pattern search facility.

I asked for knitting patterns for clothing or accessories, for an adult woman, using up to 150 yards of DK yarn.  That came up with 889 patterns. Then I specified that it had to be available via a website (not 'purchase in print'),  which cut it down a bit.

I was getting a lot of hats and mitts suggested, and decided that they wouldn't be suitable, so specialised from 'All accessories' to 'All neck/torso', which left just 119 designs, for cowls, short lacy scarves, collars, and several buttoned 'snugglers' or neckwarmers.  I looked through the first page of the remaining suggestions (they are ordered by the number of projects for each design that have been posted in Ravelry, most popular first), focussing by this time on the ones with buttons, rather than the cowls, and found the one I finally chose, the Rios Locos neck snuggler by Amy Klimt.  It was free too!  (Another advantage of Ravelry is that it has lots of  free patterns - you can restrict your search to free patterns, if you want to.)

So that's what I found to do with one ball of silk DK yarn.  I'm really pleased with the result, though I haven't worn it yet - it's not a summer item, even in Britain.  I think it will be very useful in the cooler weather, and very comforting to wear.   I think it might need more buttons, rather than just the four along one end, so that the end of the underneath layer lies flat, but I'll try it in wear first.

Now for the other odd balls of Rowan yarn....  What do you do with one ball of Aran weight?