Busy as a Bee

I have been looking at some Patons and Baldwins patterns from the 1930s that use a thick wool called Totem.  The recommended tension is of course a guide to how thick the yarn is, but I wanted to check whether the needle sizes corresponded to modern sizes, so I have borrowed a Patons and Baldwins Beehive knitting gauge.  (The beehive was the Baldwins trademark before the two companies merged in 1920.) 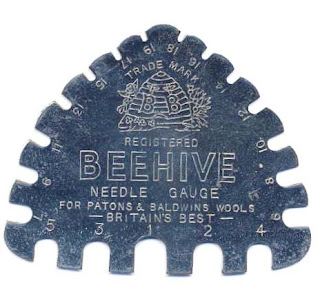 It is actually made of shiny metal (steel, I assume) though that doesn't  show very much in the photo. I tested several pairs of needles that are marked with the standard British sizes (before we switched to millimeters) and the sizes on the gauge do seem to correspond exactly.   You'll see that the gauge goes as far as size 19.  Size 14 is 2 mm, size 16 is 1.5mm.  I don't have any needles beyond that where the size is marked, but the finest of my Eureka needles, which I think are 1mm diameter, are probably a 19 (don't fit in the 18 slot, fit comfortably in the 19 slot).   But that end of the scale is a bit ethereal and not for everyday knitting.

Back to Totem.  The front cover of the December 1935 Stitchcraft magazine shows a jumper in Totem, "an attractive affair in thick wool". 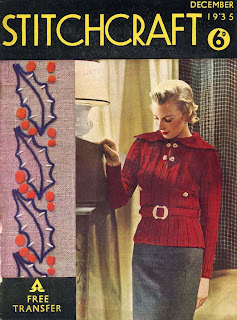 It is knitted on No. 3 (6.5mm) and No. 5 (5.5mm) needles, at a tension of 4 stitches to the inch. That seems to be between Aran and chunky, in modern terms.  I used to think that thick wool was introduced only in the 1950s, but in fact, it was re-introduced then.  As this pattern shows, knitters were using thick knitting wool in the 1930s, but during World War II it went out of production in Britain.  When clothes rationing was in force (between 1941 and 1949), a jumper like this would have used so many coupons that no-one could have afforded to buy the yarn.  Fine wool allowed you to knit a whole jumper for very few coupons.
Posted by Barbara at 10:01