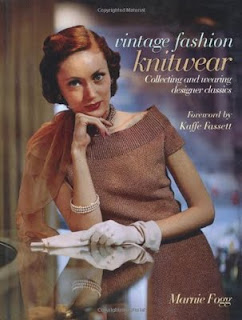 I had a birthday this week, and one of the things I got was Vintage Fashion Knitwear by Marnie Fogg.  The subtitle is "Collecting and wearing designer classics", but actually that is quite misleading - the book is almost entirely a survey of the role of knitwear in fashion since the start of the 20th century.  Most of the knitwear featured was commercially produced, and so most is machine knitted, but that is still interesting from the hand knitting point of view, because it shows how fashionable machine-made knitwear influenced the design of hand-knitting patterns - occasionally the opposite, i.e.  how hand knitting influenced fashion.

It is a very well produced book, with lots of clear illustrations.  Some are contemporary - fashion photos (usually from Vogue) or ads for knitwear manufacturers.  Others are photos of surviving garments, and the author often shows both the whole garment and then one or two small details in close-up, so that it's possible to get a clear idea of  how it was made.  Some of the knitwear is from John Smedley,
a long-established knitwear manufacturer (based in Derbyshire), others apparently come from private collections.

Altogether it's a really enjoyable book - informative and illuminating.
Posted by Barbara at 13:56