I have finally finished the Martha cardigan that I started back in March.  I actually finished the knitting weeks ago, but it was hanging around for a long time waiting for me to sew it up.  It does seem such an effort to sew the seams, weave in the ends, sew on the buttons, when you could be getting on with the next piece of knitting instead.  It's entirely illogical, I know. 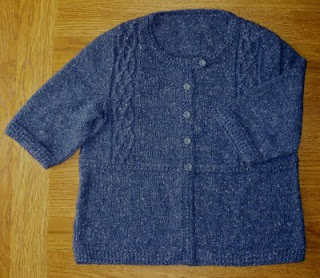 Anyway, it's finished and looks good, though the weather was much too warm yesterday to want to wear it when I modelled it for the photo.  (That won't last, of course - in fact, it is much cooler today). 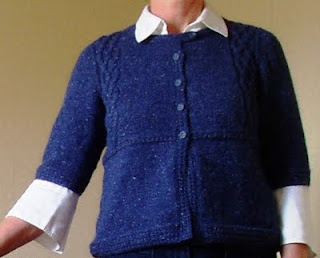 The colour is quite hard to capture in a photo - it is quite a gray blue, as in the first photo. I have made the sleeves longer than in the pattern, as I said I would back in March.  I have also changed the placement of the buttons a little bit, so that the bottom button coincides with the textured band around the bottom of the cable section - I think that the design is more coherent that way.  I do like the cables a lot and it's good that Sarah Hatton has used them on the back as well as the fronts. The back of a cardigan or jumper is sometimes left plain, which is a pity - the cables make the back more interesting to knit than an expanse of plain stocking stitch, and it looks much nicer, too.

The neck line has turned out much less scoopy than in the pattern - not sure why.  It wasn't deliberate. Maybe I misread the instructions?  I definitely did misread the instructions at the very beginning, which is why the textured band around the bottom is not quite as deep as it should be.  Altogether, it's surprising that it has turned out so well.

I am now knitting Kate Davies' Deco cardigan. I took the yarn and needles on holiday to Oregon in May, but didn't actually get any knitting done - I didn't even cast on until we got back home again.  The pattern largely avoids the sewing-up problem, because the cardigan is knitted in one piece - there is only a little bit of sewing required, backing the button-band with a strip of ribbon, as far as I can see.  I am up to the armholes, so far.  More later.
Posted by Barbara at 12:57