A Scarf for Your Fridge

I am still working at Lee Mills, to sort out the periodicals collection of the Knitting and Crochet Guild.  By now, most of the periodicals are sorted and listed, but we still occasionally find surprising things. 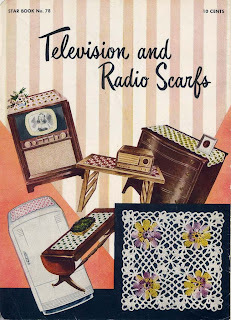 Here's a pattern leaflet published in 1950 - not in Britain, obviously, as it's priced in cents.  The patterns are for crochet motifs that can be made into mats of various sizes, to cover chairs, tables and the electrical appliances around your home - including the fridge, from the picture on the front cover.  It's a revival, I suppose, of the Victorian idea that you should embellish everything around your home, and leave not a bare surface anywhere - though even the Victorians I think would have drawn the line at a decorative mat for a fridge (supposing that they had had them).  At least televisions and radios were made to look at home in a living room, so if you were the sort of person who made a crocheted mat for every chair-back and table, it was probably quite natural to make one for the television too.   But making one for a fridge, which is designed to look functional, clean and streamlined, seems a bizarre idea.

Isn't the plural of scarf "scarves", anyway?
Posted by Barbara at 15:11