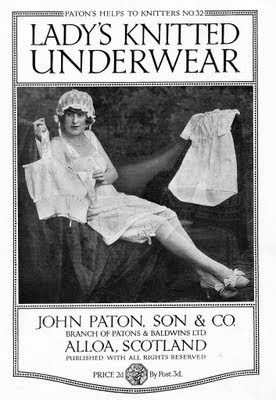 Here's a leaflet with patterns for an amazing set of knitted underwear, in 2-ply wool.  It dates from the early 1920s, I think.  (Patons and Baldwins merged in 1920, but the fact that Patons is referred to as a separate company suggests that they had only recently merged.)  I assume that at that date, a photo of a young lady sitting in her underwear would have been quite daring - she does look slightly coy, to me. She is modelling a petticoat and knickers from the leaflet, and the other garments artistically draped on the furniture are a camisole and a combination vest.   She is also wearing stockings, that seem to come just above the knee.  I surmise that the mob cap is to show that she is in her bedroom, and not anywhere more public.  But why is she wearing high-heeled shoes?  That's a bit baffling.

The underwear really doesn't look in the least glamorous or pretty to me, in spite of the lacy eyelet pattern.   In fact, all the pieces are fairly shapeless - the camisole and petticoat are just cylinders, with ribbon shoulder straps, and no shaping apart from a band of ribbing round the waist.   Not flattering at all, and whatever you wore on top would look equally shapeless, I should think.  And it's knitted woolly underwear!  You would surely only want to wear that if it was the middle of winter and you were otherwise freezing cold.  Think how itchy it would be!   This is one 1920s vintage pattern that I can't imagine anyone wanting to copy.
Posted by Barbara at 20:09