We had a working party at Lee Mills this weekend, when volunteers from the Knitting and Crochet Guild worked on sorting through the boxes brought back from storage. I was working on magazines as usual and was there on Saturday, Sunday and Monday (which is why I didn't manage to write the last two posts for Knitting and Crochet Blog Week). My job is to sort through boxes which are labelled as being magazines (not always correctly) and also the boxes that are just a mixture of papers, to separate out the pattern leaflets (someone else's job) from the rest. I made pretty good progress - 56 boxes of papers were brought back from storage last week, and I have processed more than half of them, I estimate. Some, that on inspection are genuinely just magazines, I have put to one side for later, but I have also sorted though a lot of the magazines, to eliminate duplicates, and also a lot of the "Mixed unsorted" boxes of papers. By now, a lot of the contents of any box of mixed papers I can identify immediately as duplicates of things I have already logged, and so can be disposed of. But occasionally, there is a treasure. Yesterday, I found a Patons and Baldwins pattern booklet published in 1951 to celebrate the Festival of Britain. I love the cover design. 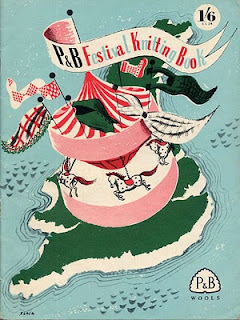 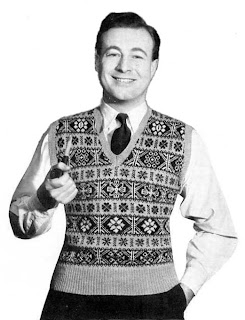 The patterns in the booklet are supposed to represent different areas of Britain (though actually only England and Scotland are represented) - for instance, there is one supposedly based on a fisherman's jumper from Great Yarmouth, and a beautiful lacy jumper in fine wool representing the knitting of the Shetlands.   In other cases, the geographical connection is a bit more tenuous - a jacket you could wear on holiday in Blackpool, for instance.   J's favourite is the Fair Isle pullover - the model's pose is what he was aiming at when I got his to wear his own to be photographed for my first post for this blog last year (though he doesn't have a pipe, so couldn't quite achieve it.)

It's planned that the last boxes of papers will come back from storage next week, and so my part of the overall task at Lee Mills is going reasonably well.  The "woolly items" are much more of a problem - the knitted and crocheted garments and other things.  In some cases, they are beautifully made and historically interesting, but there is a lot that isn't particularly important  and that we don't have room for, once we store things in a sensible fashion and not in dangerously high stacks, as before. (And a lot that is very poor quality and shouldn't have been there in the first place.)  The good quality material needs to be separated from the rest.  But there is so much of it still in storage, and so few volunteers to examine items and decide what should be kept, that it's hard to see a way forward.  There are a lot of things that should be done as a matter of urgency, but can't be done without more people.   We're all just doing the best we can.
Posted by Barbara at 18:24