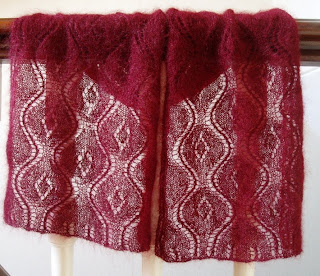 The scarf I have been knitting for a friend's birthday is finished - in fact, I finished it some time ago, but her birthday is this week, so I didn't want to post photos of it too early.  It is in Kid Silk Haze, in a rich red colour called Liqueur, and the pattern is an adaptation of the Seascape Stole by Kieran Foley, a free pattern from  Knitty. I wanted to reduce the width, to make a scarf rather than a stole, but it can't be done by reducing the number of pattern repeats so instead I simplified the pattern to make each repeat narrower. 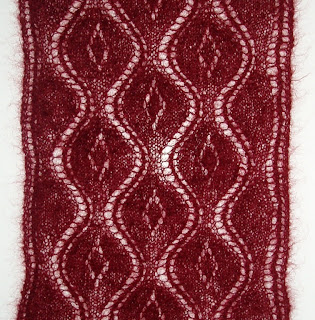 The finished scarf is lovely, I think.  It's light, airy and soft, and feels as though it has no weight at all.   The yarn is a bit of a pig to knit with - it's not a good idea to make mistakes - but the result is worth the effort.  I hope she likes it.

I have also started another lacy scarf, for another friend who is 60 in May.  This one is in Manos Lace, an alpaca, silk and cashmere mix, in the Titania colourway, which is green and purple.  It's coming along well.
Posted by Barbara at 17:20