On Saturday I went to a Rag Rugging workshop at Spun, the yarn shop in town.  In fact, we were working on cushion covers rather than rugs and using chunky yarn rather than rags, but the idea was to teach us the techniques so that we can move on to proper rag rugging if we want.

I wanted my cushion to be in dark reds and blues, and designed a kind of heraldic rose.  A rose should have five petals, but I gave it four because the cushion is square,  so it's a quatrefoil, I suppose. 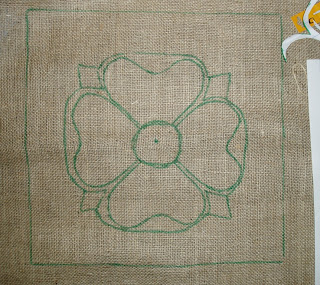 The backing is hessian - when rag rugs were commonly made in this area, I suppose hessian sacks would have been easily available, but now you have to buy it from craft suppliers.  By the end of the workshop, I had finished the outer petals and the centre of the flower, and was trying out a blue for the background. 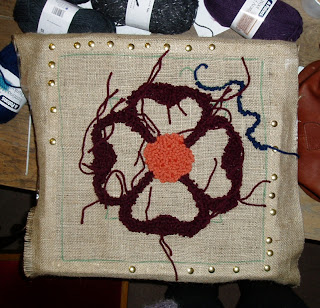 The petals will be finished in a lighter red, and the background will be done in squiggles of two shades of dark blue,  to give an intermediate colour and a livelier effect than using all one shade. (And the loose ends will be trimmed off, of course.)

It is quite a quick technique, and I am pleased with what I have done so far.  It was interesting to see how different the results were around the workshop - ranging from extremely neat and even, like a carpet, to deliberately uneven and shaggy. And the designs were very different, too, of course.

The teacher (Claire Lea) brought in some rags (strips of wool cut from a machine-made jumper) so that we could try them out.  She had brought in one of her rugs to show us, and it was very attractive.  The different fabrics she had used give a lot of variation in texture as well as colour.  It's also a very practical technique - her rug is ten years old and has been used on the floor all that time,  but doesn't look worn.  And it's easy to mend a rag rug just by re-doing any damaged bit.  But I don't think I will abandon knitting for rag-rugging.  I just wanted to try it out, and I think that one cushion will be enough for me.
Posted by Barbara at 18:53