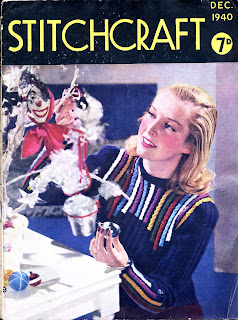 A friend read that I recently bought a 1934 copy of Stitchcraft magazine, and sent me a Stitchcraft from December 1940 that she found amongst her mother's things. So exciting! It gives a fascinating view of how people in this country were living at that point in World War II.

There are patterns for two jumpers, including the one on the cover, and some small items suitable for Christmas presents. Clothes rationing was not introduced until 1941, though I assume that materials were already in short supply. There are frequent mentions of using up small quantities of wool, as in the coloured cables in the cover jumper.

The magazine had a continuing feature on knitting for men and women in the services. The Dec 1940 issue has a balaclava helmet. The pattern is for two sizes, to fit both men and women, though it must be said that even with make-up, it's hard to make a balaclava look glamorous. 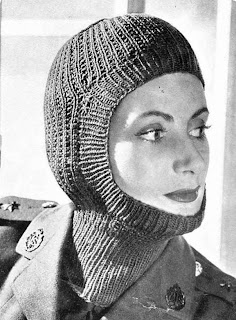 In the same feature, there is a pattern for a pair of mittens with two layers, an inner layer knitted in wool and an outer layer crocheted in string. The idea is that the string layer gives a good grip on wet ropes, etc. on board ship. Quite ingenious, I suppose, though it makes me think of how dreadful it would have been to be on deck in a North Atlantic storm in midwinter, with U-boats after you.

There is also an ad for Lux soap flakes with a nice photo of a smartly dressed young woman wearing trousers and carrying her gas mask case, with the caption "Prepare for action in this cosy knitted Norfolk jacket". You could send off for a free pattern for the jacket. It's knitted in camel hair wool for warmth and softness, though you would think that camel hair might have been hard to find by then. 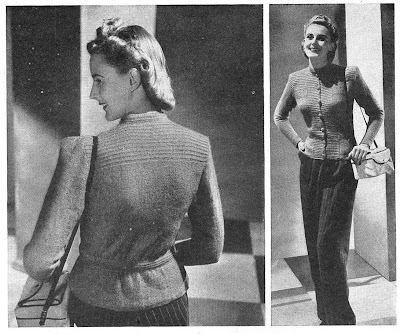 Stitchcraft had a cooking column, too, though it seems a bit outside its remit.  In this issue, it is mainly concerned with how to do your Christmas baking without the ingredients you would normally consider essential, like eggs, butter and sugar.  There is a recipe for a Christmas cake "using no eggs or sugar". It uses a small quantity of margarine or lard instead of butter, and some black treacle and quite a lot of dried fruit for sweetening - a very meagre mixture.

Alongside, there is a half-page ad from the Ministry of Food, exhorting people to eat healthily, by eating lots of the vegetables we can grow in this country, with small quantities of protein. A sort of medieval peasant diet, with added potatoes. I especially like the little rhyme:

Those who have the will to win
Eat potatoes in their skin
Knowing that the sight of peelings
Deeply hurts Lord Woolton's feelings.

Lord Woolton was the Minister of Food at the time, famous for giving his name to Woolton pie, consisting of vegetables mixed with a little oatmeal and with a pastry topping, which sounds very bland and stodgy. He would have been very pleased at the current popularity of baked potatoes, I suppose, though the fillings available now would have been far too rich for 1940.

I wonder if Sue's mother ever made any of the things featured in this magazine?
Posted by Barbara at 17:05