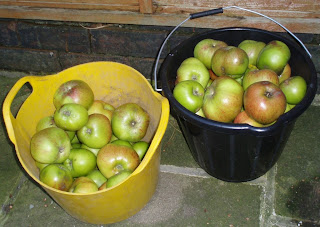 This has been a very good year for fruit of all kinds.  We have just one apple tree, which was already mature when we moved here 20 years ago and it has produced more fruit this year than we have ever had before.  We have been eating apple crumble made from the windfalls for months (it's a Bramley apple, or something like that). About a month ago, J picked as many as he could reach with a step ladder and a fishing net, and we got 4 bucketfuls, and another bucketful which had fallen off in the process and so got bruised.  The best apples are in store in the cellar and I hope will keep - we gave away a lot as well.  Yesterday,  he had another go, because once most of the leaves had gone, we could see a lot more apples still on the tree.  This time, he picked two bucketfuls, and there are about a dozen more bruised ones that we are using straightaway.  I think I need more apple recipes - that's a lot of apple crumble. 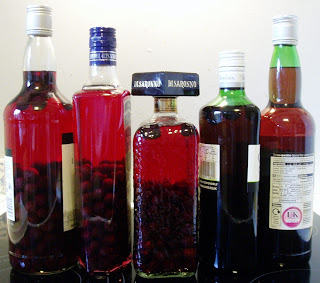 I have been making sloe gin,  too - we picked 7 pounds of sloes when we were in Staithes 10 days ago.  It's very easy to make - 1 pound of sloes, pricked with a fork or needle, to 8 oz. sugar and 1 pint of gin.  Those quantities will fill a 1 litre bottle, more or less.  Then you leave it for about 6 weeks minimum (or until Christmas), giving the bottle a shake every day until the sugar is dissolved and then every few days.  I made the first bottle about a week ago, and the gin is already a lovely deep pink colour - it will get much darker and richer as time goes on. The remaining sloes are going to the Knit and Natter group on Wednesday - it's difficult to judge how many you are picking, and we had  more than we need.  The bottle on the right is an experiment - it's the last one I made, and I froze the sloes instead of pricking them.  Some recipes say that works  just as well, and obviously it's easier.

I have only made sloe gin once before, three years ago, when we found the same patch of sloe bushes near Staithes and picked a small bagful, which turned out to be enough for one bottle.  My daughter was home for Christmas, and we tried to recreate the taste of a sloe gin fizz, which she had drunk in a bar in Portland, OR.  I don't think we ever got it exactly right, but we had a good time trying.
Posted by Barbara at 17:22

Labels: food and drink, not knitting