Revisiting a Past Project

The photo is from a "Fashion Workshop" collection of ideas for things to make  published by a long-defunct UK fashion magazine, Over21, in Autumn/Winter 1973.  It included several knitting patterns, including this one, titled Royal College Aran.   The blurb says "Fresh from a design course at the Royal College of Art, Susan Duckworth turned her talents to the traditional and folksy charm of  Aran, slicked up with  a '74 shape and doughboy pockets."

(Susan Duckworth is still a knitwear designer, and has become well-known and successful since her Royal College days, though she has mostly focussed on multicoloured designs using intarsia, it seems.)

I loved the look of this sweater when I first saw it, and how it made Aran stylish. My sister and I both knitted it for ourselves.

By then I had already knitted myself several jumpers, though I can't remember most of them, and I had  knitted a traditional Aran jumper - they had become very popular round about then for women, I think for the first time.  That first Aran jumper no longer survives - I must have worn it out eventually.  (In my memory, winters were a lot colder then, partly because my parents' house had no heating except in two downstairs rooms. So an Aran jumper got a lot of wear.)

I still have my Royal College Aran and wear it.  The design looks fresh and current to me, even now (though it seems rather quaint to read that it's a 1974 shape, as if that makes it new and exciting).  I have just packed it away for the summer, but I will add a photo later.

(Much, much later - in fact January 2013.)  I have been wearing the jumper again this week because it has been very cold.  It still looks up-to-date, I think, in spite of being nearly 40 years old.    You can see that I made a couple of changes: I did a twisted rib instead of a plain rib.  I made the cuffs ribbed, too,  instead of stocking stitch, and just had a single turn-back, instead of turning it over twice as shown.  And I continued the honeycomb cable up to the shoulder seams.    It is still very nice to wear. 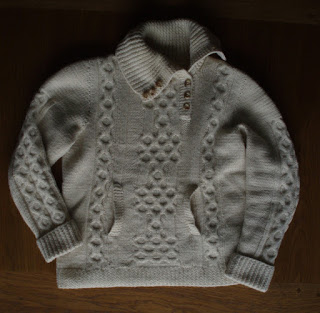 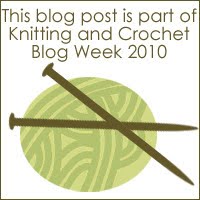