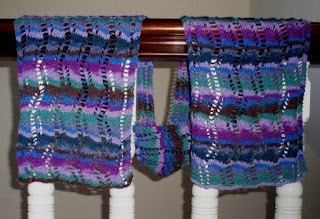 The scarf in Regia sock yarn that I wrote about previously is now finished.  It is about 140 cm. by 25 cm. (The fabric is rather stretchy, so the measurements are  approximate.)  Who would have thought that the yarn to make one pair of socks (two 50g. balls) would make a scarf that big?

I have been wearing it in the house this week because the weather turned cold again - it looks very  good with a lavender coloured top.

I should stop knitting scarves now and knit other things - at least until next winter.  On the other hand, I have been musing about a scarf in double knitting (the technique, not the yarn weight) - a two-sided reversible scarf in two colours, with the colours switched from one side to the other.   I have never tried double knitting and possibilities are intriguing, although it also sounds very fiddly and slow - not sure I have the patience.  (I can do slow, as long as it's straightforward enough to do something else at the same time.)  I found some tutorial material on the web that suggested starting with something small - a pot-holder.   But what's the point of knitting a pot-holder in a fancy two-colour pattern?  Either you never use it (wrong),  or you do use it and it gets burnt and covered with food stains (very wrong).   (I feel that I am about to start reminiscing about knitted dishcloths, so I had better shut up for now.)
Posted by Barbara at 10:10