When I was knitting last, up to the 1980s, nobody I knew of my age knitted socks.  Knitting socks wasn't cool.  Socks weren't cool - anyone over the age of 12 with any sense of decorum only wore them with trousers, and they were supposed to be discreet, if not invisible.  My mother and grandmothers could knit socks, and my mother knitted them for my father later on, but not very happily.  I think that those generations associated hand-knitted socks with the war and post-war austerity, when women had to wear socks even with skirts because you couldn't get anything else, and socks were forever needing darning. 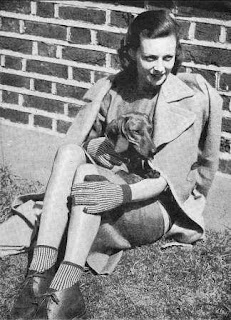 I have a book of knitting patterns that my mother's great friend Kath gave to her for her birthday in 1947, and there are several patterns for socks for women and girls.  In my view, if it's cold enough to wear woolly gloves, it's too cold for bare legs. (It seems that only children and teenagers could wear knee-length socks  -  I'm not sure whether that was a fashion law or there was a shortage of wool.)

No wonder they embraced machine-made nylon socks for men and nylon stockings for women when they became available, and didn't teach their daughters to knit socks. 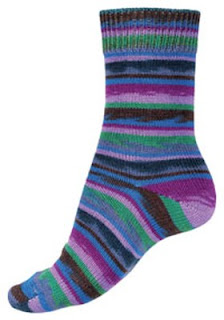 So when  I went to a knit-and-natter session at my local yarn shop late last year and saw someone knitting socks, I was surprised.  When I saw that the sock was emerging in multi-coloured stripes and even a fair-isle effect, I was astonished, indeed gobsmacked.  It was Regia Design Line sock yarn, designed by Kaffe Fassett.  He was already well-known in the 70s for knitwear designs that combined lots of colours in wonderful ways, but I had no idea that he  had branched out into designing sock yarn.  I had no idea, either, that there are so many other sock yarn ranges on the market, or that knitting socks had become so popular.


I was so impressed that I ordered the Regia yarn and a ball of Wendy Happy sock yarn from an online supplier.   The happy yarn is bamboo and nylon - my daughter bought a pair of bamboo socks and raved about them, so I thought that I'd like to try it.

The Wendy yarn is a colourway called Pisces, a mixture of shades of bluey-green toothpaste colours (Colgate Triple Cool Stripe, to be specific). 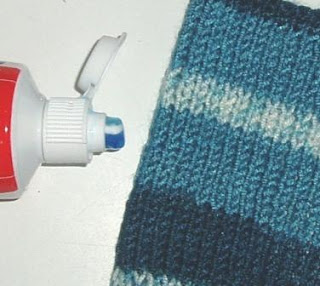 The swatch I knitted was beautifully soft and so I embarked on knitting my first pair of socks.  It wasn't as 'happy' an experience as it should have been. The yarn was very slippery, though just about manageable on bamboo needles,  and tended to split.  I had knitted on four needles before, but it doesn't feel very congenial  - I like to knit with one needle under my arm, which is obviously impossible, so the knitting feels unsupported and rather precarious.  Still, finding out how to turn a heel (with the help of a YouTube tutorial) was fascinating - I had never met the short rows technique before and it is so clever.  And it is so neat that the finished sock is one continuous piece of yarn from top to toe.

Even though knitting on four needles feels slow and fiddly, at least socks are small and don't take too long to knit.  So I have my first pair of hand-knitted socks. 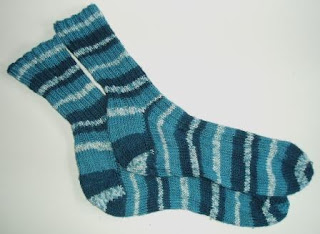 However.  Although they look fine immediately after washing, as soon as I put them on my feet, the rib loses all its elasticity and they are much too big and baggy.  I don't know whether it's the yarn or my knitting.   I have been wearing them as bedsocks when it has been exceptionally cold and the bagginess doesn't matter (and they have been very useful).

I also now realise that maybe I don't really want fancy hand-knitted socks.  I like shop-bought socks.  In winter, exclusively plain black ones (except for bedsocks), lighter colours in summer.  OK, I should have thought that through before.  So I think that knitting socks is probably not for me.