A Cowl and a Pair of Socks

I haven't written for quite a while about what I've been knitting, but I have finished two things in January and February, so it's time to present them.

I haven't knitted many pairs of socks so far, but decided a while ago that maybe I should knit more of them, and I made a pair for my daughter for Christmas. I also decided that I ought to try wearing hand-knit socks myself, instead of knitting them just for other people. (Can't say yet how that's going to turn out.)

So I bought some sock yarn in November from Loop, in Camden Passage, for a pair of socks for me.  It's Lang Jawoll Sock Yarn, in Caramel.  The pattern is from Cat Bordhi's book, Socks Soar on Two Circular Needles (although actually I knitted my socks on one circular needle, using the magic loop method).  The pattern I chose has a design of Bavarian twisted stitches - I went to a workshop on Bavarian twisted stitches two years ago and have been looking for a suitable project to do more. 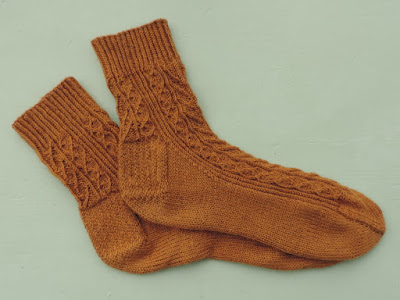 This was I think my 6th pair of socks (apart from a heelless spiral pair), and the previous pairs were knitted toe-up.  But this pair were knitted top-down.  That is the traditional way to knit socks, so I'm perhaps a bit backwards to start knitting top-down at this stage.  The heel shaping is also, I'm told, a traditional method, with a heel-flap, and a sort of triangular base to the heel.  I don't much like it, to be honest - the triangular piece doesn't seem very natural.  It's also the first time I have grafted the toes of socks.   They are very nice socks, but I think I'll go back to knitting socks toe-up in future. 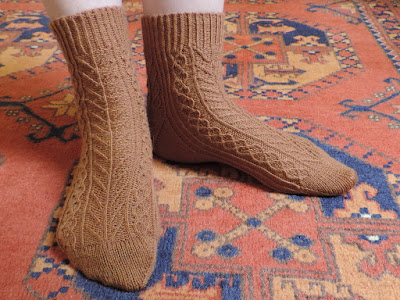 The other thing I have made since Christmas is a Moebius cowl.  I went to a workshop at the Guild Convention last July, led by Fiona Morris, and I've been intending to knit a Moebius cowl ever since.  I bought the yarn at the Knitting & Stitching Show last November - a discontinued Debbie Bliss super chunky yarn called Winter Garden, which is a surprising mix of llama, wool, silk and linen.  The colour is called Copper.

A Moebius strip is a surface with only one side and one edge.  You can make one from a strip of paper, and joining the two ends after putting a half-twist into the strip.  And you can knit a Moebius cowl in the same way - knit a rectangle, twist it and join the ends e.g. by grafting.  But it's much more satisfying to a knit a Moebius strip directly, with one side and one edge, and you can do that.  The cast on becomes embedded in the middle of the knitting, and isn't an edge - the only edge is created by the cast off. 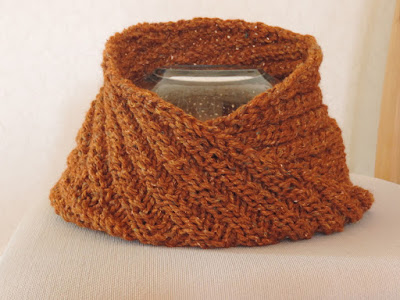 (I've posed it on an up-turned mixing bowl, in case you're wondering.)

Fiona suggested a diagonal rib as a possible stitch pattern that would work well.   It's a bit mind-boggling that if you keep knitting a diagonal rib, always going in the same direction, you get a cowl with a chevron pattern. 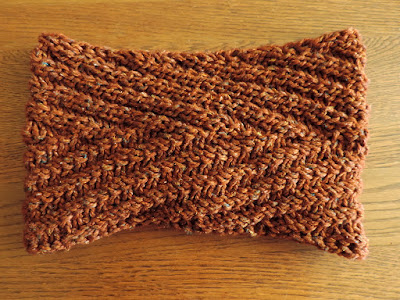 To repeat: the cast on is in the middle, between the ribs going in the opposite directions, and the cast-off edge is at the top and bottom, but is actually just one edge.  Best not to think about it too much.