In 2014,  I wrote a blog post about a mysterious pair of knitting needles in the Knitting & Crochet Guild collection. 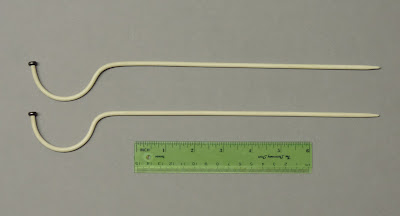 The following year, crazyhaberdasher from Australia added a comment on the post, and said that she had seen an ad for the needles in a Weldon's magazine from the 1920s.  Here's the ad, with her permission, taken from her blog post: 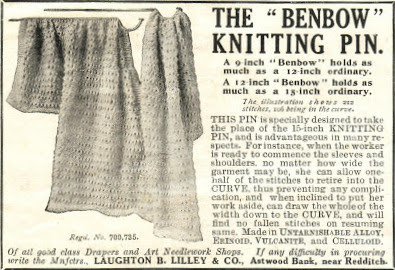 So it definitely is a pair of knitting needles (I originally wondered if they might have some other purpose entirely).  Here's the text of the ad.:

THIS PIN is specially designed to take the place of the 15-inch KNITTING PIN, and is advantageous in many respects. For instance, when the worker is ready to commence the sleeves and shoulders, no matter how wide the garment may be, she can allow one-half of the stitches to retire into the CURVE, thus preventing any complication, and when inclined to put her work aside, can draw the whole of the width down to the CURVE, and will find no fallen stitches on resuming same.  Made in UNTARNISHABLE ALLOY, ERINOID, VULCANITE, and CELLULOID.


Ours are some sort of plastic, so Erinoid or celluloid. (I imagine that an expert in early plastics would be able to identify the material.  Not me.)

The registration number, 700,735, dates the design to 1923, and I've recently found a description of the needles in a 1923 newspaper (The Sheffield Independent of 15th December),  The article is headed "Novelties for the Knitter", the Benbow Knitting Pin being one of the novelties:

The knitting pin, with curved top, is specially designed to take the place of the 15-inch knitting pin.  A 9-inch model has 12-inch capacity, and a 12-inch one 15-inch capacity. The idea is that by having a semi-circular curve at the end of the pin, 106 stitches can be compressed into this space and afford the knitter of a garment the comfort and convenience of a shorter pin.

This is clearly the Benbow knitting pin, even though it's not named.  I guess that the author didn't want to stray into advertising by giving the name, but as it is, I don't think the description would help anyone wanting to buy a pair.  It seems to have been a very shortlived novelty anyway.  Awkward to manage, I imagine - you would have a lot of weight on the end of the needles, where the curve is, and if you like to knit with the right needle under your arm, like me, it would be a bit uncomfortable to have all that bulk there.

(I'm slightly curious about the name "Laughton B Lilley", too - Laughton was the name of the company that made Stratnoid knitting needles, and Harry Lilley was the patentee of the original duralumin Stratnoid needles.  But Laughton B. Lilley sounds made-up to me.)

The other 'novelty for the knitter' in the 1923 article is "a winder with a knitting-pin gauge":


The wool or silk winder is made in the form of a maltese cross, of two strips of thin material, and can be closed when not in use, to save space; but the most important part of the patent is the gauge holes to measure knitting pins.  When anyone is engaged in knitting an article they naturally settle on the thickness of the pin they wish to use for that purpose, but having a number of pins of various sizes to hand it is a very simple mistake—lacking a measure to test the size of the needle—to use a needle of the wrong gauge as the work proceeds, and thus possibly spoiling an otherwise perfect garment.

We don't have anything like that in the Guild collection, but we do have cross-shaped holders designed for winding artificial silk on to, like these:


I wrote here about the need for something like these for winding art silk, or rayon yarn, because it is so slippery. And I have seen something like the 'novelty' described in 1923, illustrated by Susan Webster.  Susan's winder has two cross pieces, pivoted in the middle, which open out to a shape like the two winders shown above, except with squared-off ends to the arms.  And two of the ends have holes in, to measure knitting needles.  Susan dates the winder to World War 2, but if it is the one described in the article, it's much earlier.