Last week I bought a copy of Designer Knitting - that's the international edition of Vogue Knitting.  It was the Winter 2015/16 issue, and has some very nice updated Bohus knits, which was what attracted me.  The magazine has taken a while to get to this country - it had not been on the shelves in W H Smiths for very long when I bought it, yet Orange Swan reviewed it on her blog The Knitting Needle and the Damage Done last December.

One small news feature caught my eye, because it mentions the Knitting & Crochet Guild.  Yarn Stories is a yarn brand based in a mill at Slaithwaite, near Huddersfield.  Last year they ran a competition to design a blanket square inspired by the Guild's collection.  The finalists' designs have been used to create a pattern for a blanket. 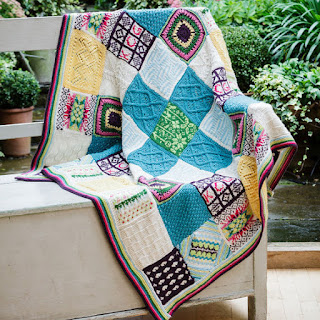 It's an amazingly rich design, incorporating stranded knitting, cables, crochet, lace,....   The square with the KCG initials is inspired by a Sanquhar glove pattern.   Yarn Stories are selling the pattern, or the pattern + yarn,  here, and very generously donating the profits from the pattern to the Guild.

The item in Designer Knitting has a brief description of the Guild collection - and I should take the opportunity to update one piece of information.  It says that we have 31,000 patterns in the collection.   In fact, we have at least 38,500 pattern leaflets - those are the ones that we have sorted and recorded so far.  I've been estimating for quite a while that we have about 50,000 pattern leaflets altogether, and I think that's about right.  But if you want to count all the patterns, you would have to include the ones that have appeared in books, booklets and magazines  - I wouldn't even like to estimate how many of those there are.  Let's just say a lot.   We're just beginning to catalogue the pattern leaflets, which is a daunting task.  It'll take a while.
Posted by Barbara at 18:26