I mentioned in a recent post that I am knitting a cardigan in a cotton and linen yarn in anticipation of warm weather coming back again some time soon (though there are no signs of it yet).    I have finished the back, so far. 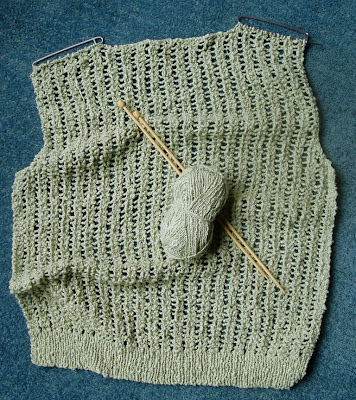 This is pretty good progress.  I have been spending a lot of time reading (and so a lot of time knitting) because I am reading A Tale of Two Cities for one of my book groups  (the meeting is soon).   We decided that we ought to read a Dickens novel this year, and this one is relatively short.  I don't think I have ever read Dickens before, though I have seen several adaptations of his work on TV.  I think I even saw a BBC serialisation of A Tale of Two Cities in the distant past - even so, I don't remember the story in any detail, except for the ending, of course. (It is a far, far better thing, etc.)  And Mme Defarge.    Is she the most famous knitter in English literature?   I can't think of any rivals.  But I can't figure out what she is knitting - when she first appears, she is somehow encoding into her knitting details of all the aristos and government spies that are to be eliminated when the Revolution comes.   How does she do that?  Is it some kind of Morse code, with knit and purl stitches?   Why doesn't anyone see that this is a very odd piece of knitting?  In one scene, she is working the name and description of a spy into her knitting while he is talking to her, and he is not at all suspicious.

Anyway:  my knitting. This is a second attempt at a making summer cardigan with some slubby cotton and linen yarn that I bought in a sale a couple of years ago.  (I still have a lot left over.)  The first attempt didn't really work, partly because the stitch pattern I used turned out to have a bias, so that pieces that should be square aren't. (My fault entirely, for choosing an unsuitable stitch pattern.)   Also the sleeves are too baggy, which comes from the pattern I was basing the general shape on.  The original cardigan was modelled by a tiny waif, and it was falling off her in all directions, so that the fact that the sleeves would be very wide on a person of normal size was hidden in the general all-over bagginess.  This time I am basing the sleeve measurements on something that I know fits me.  So I hope it will turn out much better this time.