My friend Ann Kingstone has recently released a shawl pattern designed to celebrate the Queen's Diamond Jubilee. It is in a special Jubilee yarn from The Natural Dye Studio - 75% British Bluefaced Leicester wool, 20% silk and 5% of something sparkly called stellina. The pattern is free with the yarn, or you can buy it via Ravelry under Ann Kingstone Designs. 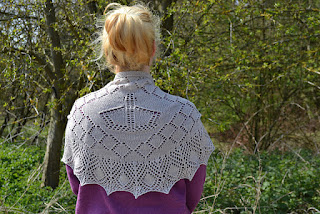 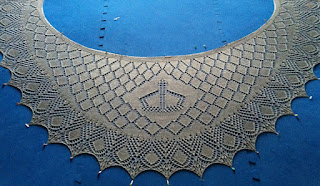 As always with Ann's designs, it's rather special - probably technically challenging, but worth the effort to knit. Just the thing to wear to a Jubilee street party. 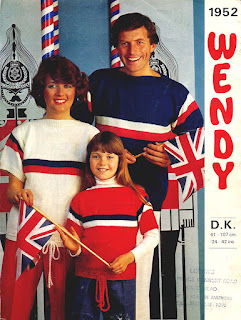 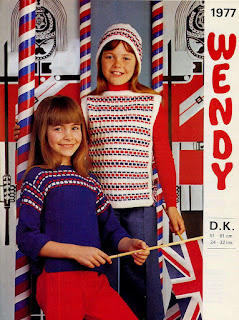 I have seen some other Jubilee knits in the last couple of weeks, while I was sorting the boxes of Wendy patterns from Lee Mills.  I found two patterns that seemed to be out of sequence - their general design and layout was the same as patterns numbered about 1550 to 1750, but these were numbered 1952 and 1977.  Eventually, when I looked properly at the patterns and not just the numbers, I realised that they were Jubilee patterns, for the Queen's Silver Jubilee in 1977.  Wall-to-wall red white and blue does not seem a very subtle way to celebrate.  I wonder how many people knitted these patterns for the occasion.

I found the numbering of these two patterns very annoying too.  Wendy re-used the numbers 1952 and 1977 when they came to those numbers in the proper sequence, so having these two patterns outside the sequence of all the other patterns is very inconvenient.  It messes up the cataloguing no end!
Posted by Barbara at 18:13