I have been reading Just My Type, by Simon Garfield, a book about fonts, full of fascinating information.  In honour of that, I am writing this post in Georgia, rather than the default font offered by Blogger.  There are not many fonts available in Blogger, but Georgia was (I now know)  designed by Matthew Carter for Microsoft, specifically for computer use.  I like it.

Reading Just My Type has made me more conscious of fonts, so when we (unusually) bought The Observer on Sunday, I noticed how different it looks to The Guardian, which we read every other day.  (We don't normally buy a Sunday paper because the Saturday Guardian lasts all weekend, but it was New Year's Day and it rained all day...)   They are sister newspapers, they have the same Berliner format, but they use a different set of fonts.

The headlines are in two versions of the Prelo font family, one with slab serifs (Prelo Slab Extra Bold, I think), and a sans serif font (Prelo Light?).

It may just be the unfamiliarity, but I don't like the slab serifs of Prelo Slab - it looks clunky to me, especially when it's used in a smallish size for the subheads in the middle of a long stretch of text. Prelo Light is easier to get used to, though a bit spindly. 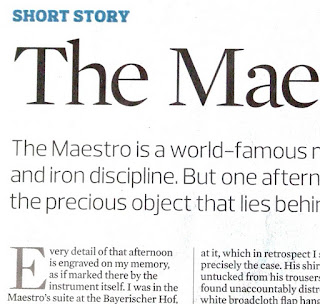 The main font used in the paper is at first glance little different to Times New Roman and other serif fonts in common use, but when you see it used in headlines, it is a little quirky - the serifs are very obvious and spiky, the ascenders rise above the tops of the capitals.  It's rather elegant, I think.   The font is Mercury Text, designed by Hoefler & Frere-Jones.


I feel an inclination to become a font nerd, but I don't think I can manage it - I can't recall the detail of a font when I'm not actually looking at it.   I might stick with Georgia, though.
Posted by Barbara at 17:40