A research student visited Lee Mills recently, to look at the 1930s magazines - she was interested in how ideas of fashion and glamour were transmitted to women making their own clothes.  So, for instance, Stitchcraft had a regular feature in its early issues reporting on Paris fashions.  Pattern leaflets for the most part did not attempt to persuade buyers of their fashion credentials - they relied on the photo to appeal to knitters, and maybe gave a brief title like "Lady's Pull-over and Sleeveless Cardigan".

But Copley's pattern leaflets of the 1930s were different - the front cover told you why this design was just what you should be wearing right now, and even what colours you should knit it in. 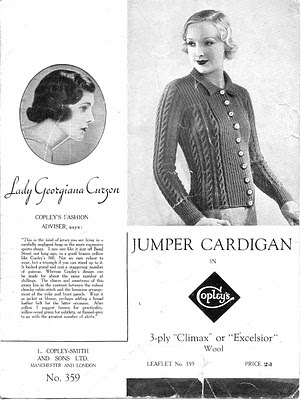 To add extra weight, they employed two aristocratic fashion advisers, Lady Georgiana Curzon and the Countess of Carlisle. In one style of leaflet, one of the ladies tells you what she likes about this design:

"This is the kind of jersey you see lying in a carefully negligent heap in the more expensive sports shops.  I saw one like it just off  Bond Street not long ago, in a good brazen yellow like Copley's 160. Not an easy colour to wear, but a triumph if you can stand up to it. It looked grand and cost a staggering number of guineas.  Whereas Copley's design can be made for about the same number of shillings. The charm and smartness of this jersey lies in the contrast between the robust chunky cable-stitch and the feminine arrangement of the yoke and front panels. Wear it as jacket or blouse, perhaps adding a broad leather belt for the latter occasion. After yellow I suggest brown for practicality, willow-weed green for subtlety or flannel-grey to go with the greatest number of skirts."


A clever piece of writing - it tells you that even Lady Georgiana Curzon, who shops in Bond Street,  is keen on saving money, and that knitting this will give you a jersey that looks expensive.  It explains why it's a charming design that should appeal to you, and that it's perfectly OK to knit it in a "practical" colour rather than the fashionable yellow. 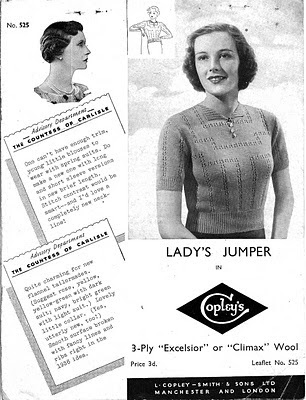 Another style of fashion advice purports to show two memos on the front cover, from one of the ladies to the Copley's designers. The first asks for a new design and suggests some of the things that she would like to see in it, and the second says, "Yes, that's just what I had in mind." Thus:


"One can't have enough trim, young little blouses to wear with spring suits. Do make a new one with long and short sleeved versions in new brief length. Stitch contrast would be smart -- and I'd love a completely new neckline!"

(I do appreciate it when people mention the date.  So helpful!)

You can find a nice photo of Lady Georgiana Curzon and her baby son in 1937, at the National Portrait Gallery's web site, here  and amazingly you can see a short film of her wedding in November 1935 here*.  (Sadly, the marriage didn't last.)  I assume she gave up being a fashion adviser then and so the patterns featuring her advice date from the early 1930s, when she was in her early 20s.  Copley's were evidently aiming at young, fashion-conscious knitters, and so chose a young, fashionable woman, with the cachet of a title, to appeal to them.