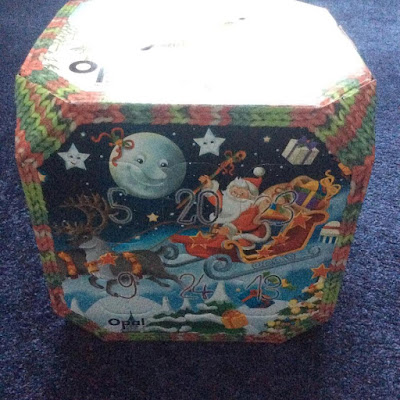 In November, a group of knitters from the Huddersfield Knitting & Crochet Guild branch decided to share two Opal advent calendars - these calendars have 24 doors for the days of Advent, like other Advent calendars, but behind each door is a 15g. ball of Opal sock yarn.  There were 8 members of the calendar syndicate and 48 balls of wool, so 6 balls each - sounds simple, doesn't it?  No.  They devised an extremely complicated scheme - before any of the doors were opened, the ball behind each door was pre-allocated to a syndicate member.  Then each member had custody of one of the calendars for 6 days.  Every day she opened the appropriate door and posted a photo of the ball door could see what she was getting.  Here's one of the photos, posted by Ann Kingstone. 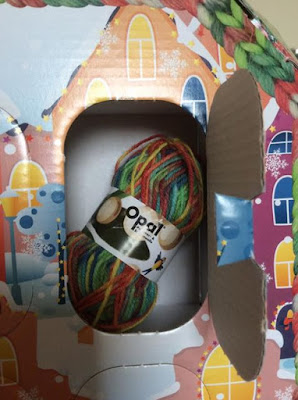 And after six days, the keeper of the cube met the next keeper, to hand it over.

Yesterday was the grand finale, when the syndicate met to distribute the balls of wool to their owners. I wasn't a member of the syndicate, just a fascinated observer, but I went along to see how it all worked out.  They met in Salt's Diner in Salts Mill in Saltaire, the other side of Bradford. 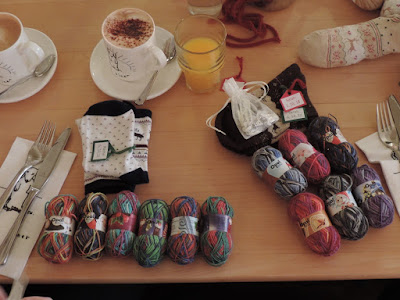 Every member of the syndicate was given a pair of socks with their balls of wool stuffed inside.  Then there was some swapping, so that people could get a selection of colours that they liked.  There was even some discussion of what they might knit with the yarn - the 6 balls will make a pair of (very multi-coloured) socks, though you could mix them with a plain background colour and make something bigger like a shawl.  And as far as I could see, everyone was happy with their share, and keen to do it all again next year.

By then it was dark, and we went into the village to see the Saltaire Advent windows, which are lit up every evening until January 5th.  Like any other Advent calendar, a new window was 'opened' every day in December until Christmas Eve, though they started with 10 windows on December 1st, so now there are 33 windows to see.   The windows are scattered all over the village, and I didn't have time to see many of them, but I did see some very well-designed and executed displays.  And the very first that we found was this: 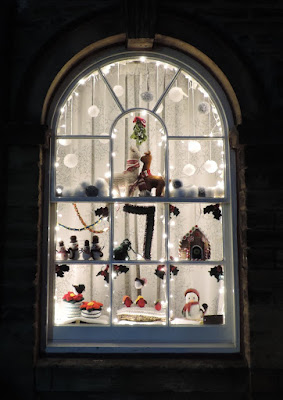 It's all knitted or crocheted - poinsettias in pots, snowmen, paper chains, a gingerbread house,... 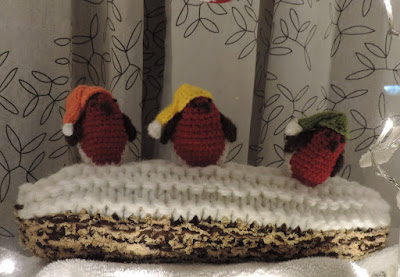 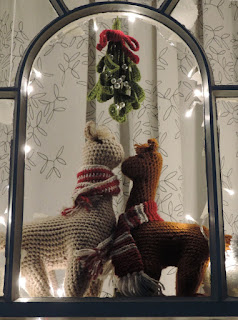 (Alpacas are important in the history of Saltaire because Titus Salt, who built the village for his mill workers, made his money out of spinning alpaca yarn.)

So window no. 7 was a very good start for a party of knitters.

Another favourite:  window 19, showing Father Christmas in his sleigh flying over the village. 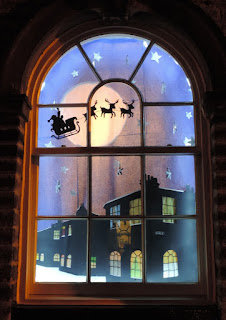 And here's window 9, a display about Titus Salt's rules for the people living in Saltaire: 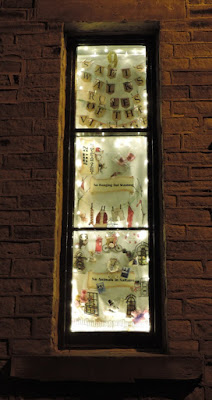 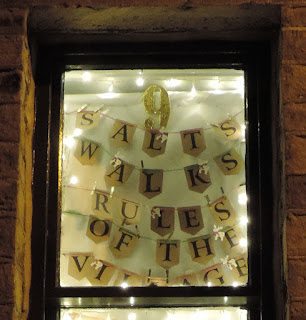 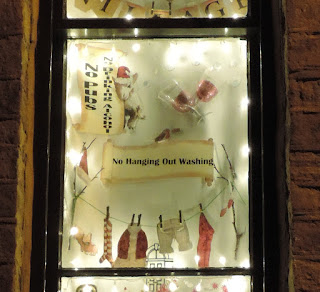 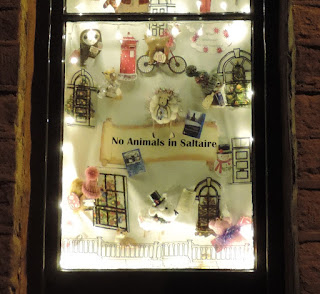 No pubs; No drinking alcohol; No hanging out washing; No animals in Saltaire.

You can read more about the rules here.  As far as I remember from a guided walk around Saltaire, the prohibition on hanging out washing was because Salt had provided a wash-house and he wanted the villagers to pay to do their washing there, but it wasn't popular.  Some villagers got around the rule by hanging out their washing on vacant land just outside the village.  And he wasn't against alcohol as such - the rules was really against being drunk, and he didn't want pubs where workers might meet and combine against him.  Philanthropic, but only up to a point.

The windows were worth seeing.  The Saltaire Living Calendar has been happening every Christmas since 2006, though I had not heard of it before this year - I'll go again next year, with enough time to see them all.
Posted by Barbara at 17:41