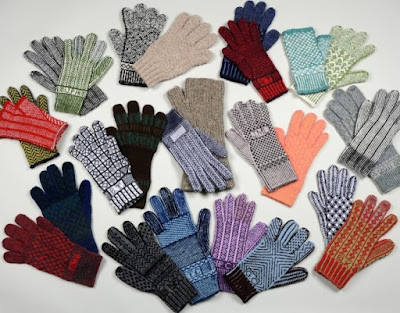 Last week, an exhibition of knitted gloves opened at the Bankfield Museum in Halifax.  It's based on the work of my friend Angharad Thomas, who is a fellow volunteer working on the Knitting & Crochet Guild's collection.  For several years now she has been knitting intricately patterned gloves, based on historic Sanquhar and Yorkshire Dales originals  - and has a blog about them, too.

On Saturday I went with her to the museum, where she gave a talk to introduce the exhibition.  She talked about her designs and sharing them with other knitters, through the blog and patterns published in The Knitter and elsewhere.  And she showed photos of gloves that she has studied in the collections of the V&A Museum (like these 16th century knitted gloves, made for a bishop) and the Glovers' Company (like these beautiful knitted silk gloves from the early 18th century).  She talked too about the Sanquhar and Yorkshire Dales gloves that have directly inspired her own work - some of them in the Knitting & Crochet Guild collection, and now on show at the Bankfield.

I have a pair of Sanquhar gloves myself - you can't not be interested in them if you work with Angharad.  (As I explained here, I didn't knit them, I bought them from the arts centre in Sanquhar.) 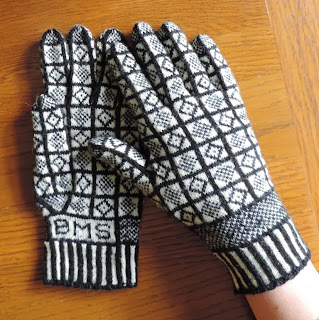 Mine are immediately recognisable as Sanquhar gloves, because the range of patterns is quite limited.  (Black and white are a traditional choice of colour, too, though in principle you can choose any colours that you fancy.)  But it's amazing how much variety they have inspired in Angharad's work.  Here's a case of gloves, all in subtle colours, but very different designs - I especially like the ones where the back-of-the-hand part is divided into four sections that then lead on without a break into the fingers. 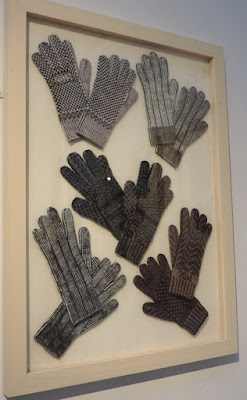 And here's a more traditional design, based on the Yorkshire Dales shepherd's plaid pattern I think, but with a sneaky red lining to the cuff. 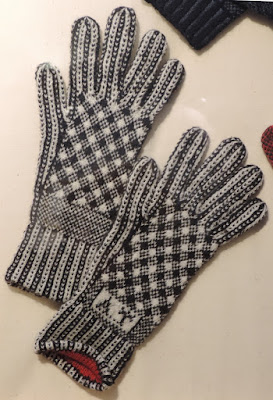 Most of Angharad's gloves are hand-knitted, but she has been experimenting with machine knitting recently, and the exhibition has a case of those. 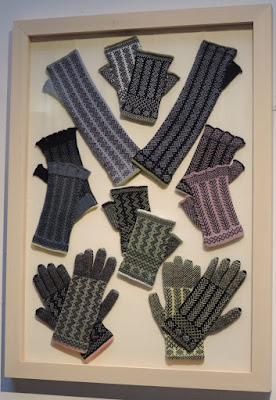 The exhibition is open until 14th January, and is well worth a visit for knitters within reach of Halifax.  (The Shared Histories exhibition, at the museum until 7th January, was very interesting, too.)

My next project, after the scarf I'm working on now, is going to be one of Angharad's patterns.  Not gloves (I've knitted gloves, it's not for me), but fingerless mitts,  The design is called Bonham, and the pattern is on sale on Ravelry, in aid of Knitting & Crochet Guild funds.  I've got the yarn already - I'll keep you posted. 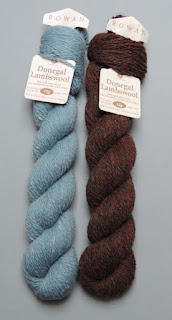