My copy of The Knitter's Friend, edited by Mrs Hope, has an ad for a knitting needle gauge, The Cornucopia Gauge. The gauge was evidently a production of the Hope family - anyone who couldn't find a shop that sold them could buy one direct from Mr Hope.  But I think we can be more precise - it has a monogram stamped into it, which I think is GCH for George Curling Hope, the son of the family.  I guess that he designed it, and was using his mother's little book to advertise it. 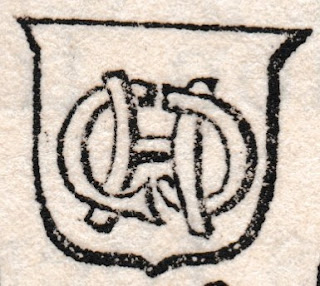 I have never seen an actual example of a Cornucopia Gauge, but Sheila Williams illustrates one in her book The History of Knitting Pin Gauges, so some at least were made.

The ad in The Knitter's Friend says that the gauge is "a correct measure, according to the numbers used in the works of Mrs Gaugain, Mrs. Mee, Mrs. Jackson, Mrs Burrell and Mrs Hope" - they were authors who had all published books on knitting in the 1840s (see the list here).

Steel knitting needles were made of wire, and indeed called 'knitting wires' by some writers, so the numbers used as knitting needles sizes were wire sizes too. (It was the standard sizing for knitting needles in the U.K. until metric sizes replaced them.)  That explains why all the writers listed, and George Curling Hope, used the same sizing and numbering system - they had adopted the sizing and numbering already used for wire.   One knitting author did use different sizes: another ad for the Cornucopia Gauge says "This gauge is a  a correct measure..., according to the numbers used in every publication on knitting, except those of Mrs. Lambert."    Frances Lambert had introduced her own knitting needle gauge, the 'Standard Filière' in 1842.  An ad for it claimed: "The want of an Instrument for determining with accuracy the size of Knitting Needles has long been a cause of complaint" - a want that was soon filled by several competing suppliers, including George Curling Hope.

Many of these gauges, including the Standard Filière, were circular discs, but in 1847, a bell-shaped gauge was patented by G. Chambers & Co. and that became the most common shape for knitting needle gauges.  Bell gauges can be found with the names of many different manufacturers and suppliers until well into the 20th century - we have an Emu bell gauge in the Knitting & Crochet Guild collection which dates from the late 1940s.  So although The Knitter's Friend and The Knitter's Casket sold well, the fancy shape of the Cornucopia Gauge did not assure its success - and George Curling Hope turned to other ideas.