One of the more unusual items we have in the Knitting & Crochet Guild collection is an enormously long sampler of knitting stitches, in a pink synthetic yarn.  There are about 950 stitch patterns in it, and it was knitted over several decades from the 1940s on.  Gladys, the knitter, intended to get to 1000 stitch patterns, but sadly she had to give up knitting due to arthritis and so never reached her goal.  After she died, her family gave the sampler to the  Guild, along with the 17 spiral-bound Woolworths notebooks that Gladys used to record the patterns.

When the sampler came to the Guild, it still had the needles and final ball of yarn attached.  It has since been cast off and washed (not easy!).  It was brought to the Guild weekend in Sheringham two weeks ago - now mounted on a garden hose reel and trolley, so that it can be easily unrolled and re-rolled - a very clever idea, that makes it much more manageable.

I had slip stitch patterns on my mind at the time, because of the slip stitch workshop I did at Sheringham, so on looking through one of Gladys's notebooks, I noticed a slip-stitch pattern. 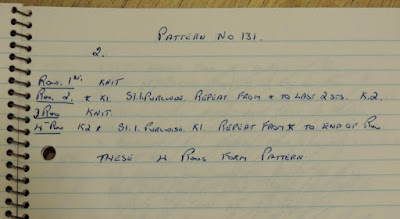 None of the patterns in the note-books are named, as far as I know, but I recognised this one: it's slip-stitch honeycomb, which I used for the cushion I made last year,  It's odd that Gladys didn't record the names - the numbers are not very memorable by themselves. Did she remember all the names, so that she didn't need to write them down?  The information from her family is that she invented some of the patterns, and some of them are marked M.U. in the notebooks, which could be 'Made Up' - you would think that she might have named the new patterns as well.

All a bit mysterious - but fascinating.