A Jolly Knitted Outfit for Skating 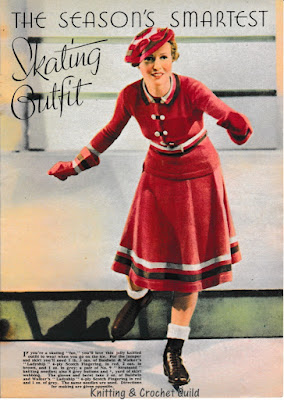 2016 already.  Here's a suitably wintry outfit - though not for this winter, so far.  It was the wettest December on record and there have been floods all across the north of England and in Scotland.  We haven't been much affected here, but just over the hill in Calderdale, there has been serious flooding all along the valley, with homes and businesses devastated in Todmorden, Hebden Bridge, Mytholmroyd, Sowerby Bridge, Elland, Brighouse, Mirfield...   And it's still raining.

Elsewhere in the magazine there is an article encouraging readers to "Try skating this winter" - either at an indoor rink or on open ice.  I doubt if there's much skating in open ice in this country now, if any, and I don't know how many permanent ice-skating rinks there are - but I'm pretty confident that no-one knits themselves a special outfit for skating these days.

But I think in the 1930s, there wasn't so much overlap between sports wear and everyday wear as there is now - women then dressed much more smartly as a rule.  You couldn't just find some casual clothes in your wardrobe to go skating in - ordinary skirts would be far too narrow, for one thing.  The cover of the magazine shows what the skater might wear for every day - the magazine gives the knitting pattern for the puffed-sleeve jumper: 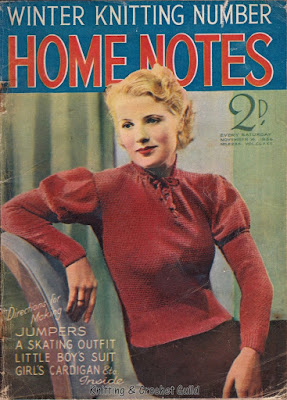 I have seen other 1930s knitting patterns for skating outfits too.  The first is in the same colour scheme of brown, red and white as the Home Notes outfit, if you choose the colours suggested in the pattern: 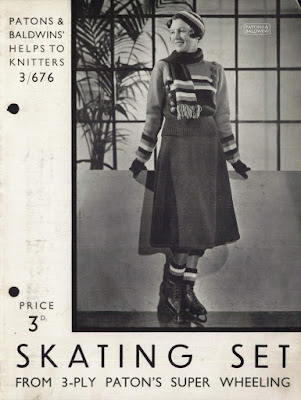 The other was published a few years later, and the skirt is much shorter.  The pattern gives instructions for jumper, skirt, knickers, hat, gloves and socks. 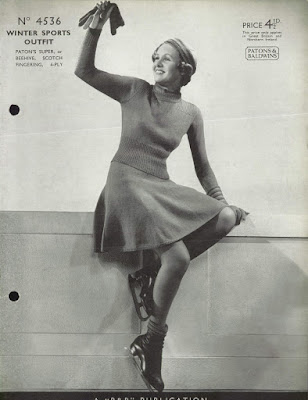 It looks much plainer at first sight than the other two, but in fact the hat brim, the sock tops and the gauntlets of the gloves are all in garter stitch stripes, of Mermaid (turquoise?), Rusty (rust-red, I assume), and Mustard, with the rest of the socks, hat and gloves, and I guess also the jumper and skirt, knitted in the Mermaid colour.  So it would have been a colourful outfit. - the illustration doesn't do it justice.

And one of my very favourite Jester patterns, from the late 1940s/early 1950s is a winter sports outfit of a sweater with matching mittens and hat, shown with a pair of ice-skates. 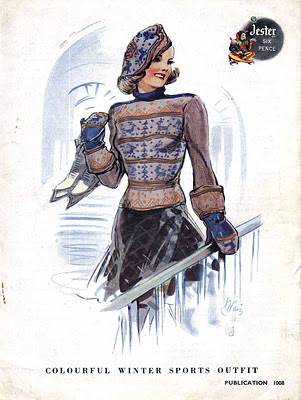 .
So for anyone who wants to knit a skating outfit, there is quite a range to choose from.    Personally, I'd choose the Jester pattern, but forget about the skating.