My updating of Marion Foale's Badminton jumper is now finished (though it's not actually warm enough to wear it at the moment).  I'm very pleased with it. 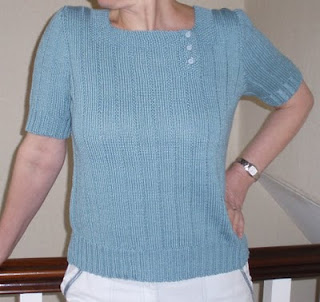 It is closer-fitting generally, and especially around the sleeves, than the original.  I wouldn't describe it as "a long slender shape" as the book did, but that's mainly because I'm not.  I think that it does reflect the ideal version of Badminton that I have had in my head all this time, that has mutated over the years as jumper shapes have changed. 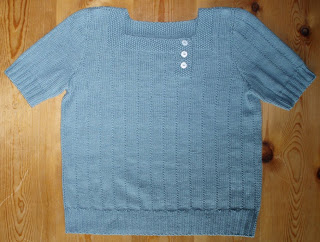 I like the way that the neckband has turned out.  I managed to work it out so that the only loose ends were at the armhole edge, so that neckband as you see it is exactly as I finished knitting it (except for sewing on the buttons, obviously, and sewing together the two layers of the front opening at the bottom).    It took some careful thought to achieve that - for instance, the casting off of the two sides of the front opening is done from the top of the button band towards the armhole, to avoid having an awkward loose end there. Hence, the casting off is done in opposite directions on the two sides.   Which means knitting the left front back to front, i.e. wrong-side rows become right-side rows.   It seemed to me worth the effort to work all that out, but I don't think that many designers bother.   Loose ends seem to be  the responsibility of the knitter, which is reasonable when they are the result of changing balls of yarn, but when they are caused by some feature of the design, I think that sometimes the pattern could be devised to deal with them neatly.
Posted by Barbara at 18:53