I wrote a post two years ago about Double Century knitting needles, which had a metal core inside a plastic coating.  The original idea was patented in 1913 by Emily Doubble, although she seemed an unlikely inventor, as she was a widow in her 70s at the time. But this week, Emily's great-granddaughter commented on my post and said "she did invent a knitting needle which her son, Theodore, patented for her. My aunt told me that she was fed up on her fine needles breaking and had the idea of putting a metal wire in them. She was a great knitter, embroidery and wood carver!"

(One of the best things about writing a blog is that sometimes people give you fascinating information in comments - sometimes several years after the post first appeared.)

Belinda's comment reminded me that at the time I wrote the post, the earliest ad I had seen for Double Century needles dated from 1945, though it was clear from the wording that the needles must have been in production before the start of World War II.

But I've since found a much earlier ad.  It appeared in Needlecraft Practical Journal, and I date it to 1921.  (I'll write later about dating issues of Needlecraft, because it's not at all straightforward.) 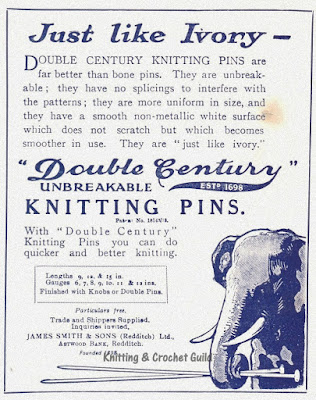 At that time, bone was a common material for making thicker sizes of knitting needle, and you could also get ivory knitting needles, though they were of course much more expensive.  Double Century needles were always a cream colour, and this ad shows that it was because they were imitating the colour of bone or ivory.

In the same issue of Needlecraft, was an ad for Stratnoid knitting needles - another brand based on a patent. 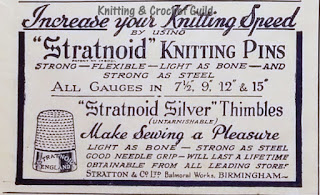 This is also an earlier ad than I had found previously.   The patent (to make knitting pins from duralumin, an aluminium alloy) was granted in 1919, so the manufacturers were quick to get the idea into production.

The claim is that Stratnoid knitting pins are "STRONG - FLEXIBLE - LIGHT AS BONE - STRONG AS STEEL".  As with Double Century, bone was one of the materials to compete with.  It's interesting that they are claimed to be flexible - the finer ones will bend a bit, but you'd need a lot of force to bend the thicker ones.  And the ad doesn't mention their other big advantage over steel - they don't rust.

And with both Double Century and Stratnoid needles, you could knit faster, allegedly.  I've tried both, and they are very nice to knit with, but I don't think I can knit faster than with other needles.  Perhaps I should be comparing with rusty steel needles, wooden needles with splinters, or bone needles with  snags, but if so, I'd rather not do the experiment - I'm convinced already.