Through the local newspaper, the Huddersfield Examiner,  I have been trying to find out more about Wakefield Greenwood, a Huddersfield business that sold knitting yarns to stores throughout the country, and elsewhere, in the 1940s to 1960s.  I got a few replies to my appeal in the Examiner for information, and a couple of weeks ago I met someone who worked for the company for more than 20 years.  She has given me a lot of fascinating information, so I am gradually getting a more complete story, ... and she gave me several things for the Knitting & Crochet Guild collection, including a box of knitting needles. 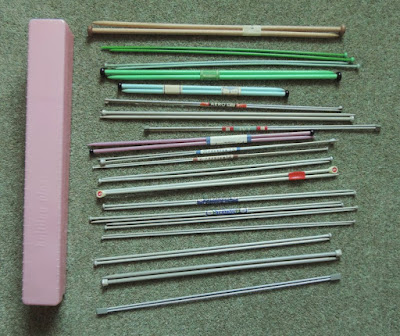 I've definitely turned into a knitting needle nerd, I now realise, because I got quite excited by some of the makes.  Several of the pairs still had their original paper labels - not because they were unused, but because the donor liked to use the labels to keep the pairs together.

Here are the labels:

The needles at the top are Wimberdar brand - along with three other pairs of green/blue/turquoise plastic needles in the box. Wimberdar specialised in brightly coloured plastic needles, though they made other things too.  There are several pairs of Milwards Phantom needles in the box, in both grey metal and mauve plastic.  Then a really exciting pair - the Ivy needles.  I had never heard of Ivy needles before, and more surprisingly, neither has Google, as far as I can see.  There is no clue on the label as to who made them, except that it says "Made in England".  There are no marks on the needles or head, apart from the size, and IVY written on the head, not very clearly - barely visible except in a strong side light. 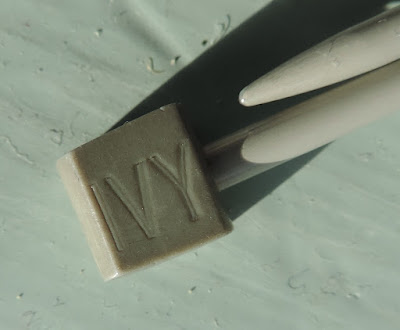 The labels on the Stratnoid needles read "The New Stratnoid Knitting Pins", The needles are the usual gray enamelled metal, like several other brands, and so are no longer the shiny duralumin of the original Stratnoid needles.  So 'new' in this case means 'just like everyone else' - a bit disappointing, when they started out being different from everyone else.

And of course there was a pair of Aero needles, made by Abel Morrall of Redditch - they must have been the commonest knitting needles in the country.

One pair of needles which did not have a label was, even so, particularly exciting,  I hadn't heard of the make before and the needles were marked with a patent number.  (I do like a knitting needle with a patent number.)  The make is Jouvenia, and they are the usual grey enamelled metal, so don't look very interesting.

Here's the head, with the patent number: 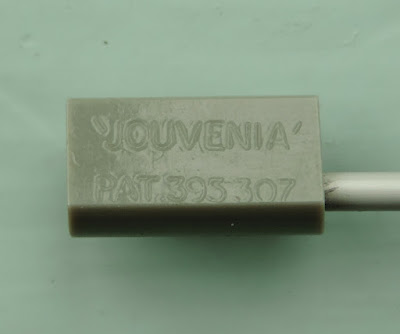 Patent 395307 is a British patent granted in 1933 to Joseph Jouve, a Frenchman.  The reason for the head being offset is that it has a hole in it, alongside the needle itself, where the point of the other needle can be inserted.  So the pair of needles can be joined together like this:

(Although actually it is not at all easy to get the points of both needles at once into the hole on the opposite head.)  The idea is that fixing them together like this will keep the knitting securely on the needles, as in this drawing from the patent application.

.
A Google search for Jouvenia found a couple of ads for Jouvenia needles in the French magazine Tricot Journal in 1936, and a sheet of headed paper from the Jouvenia factory in Paris, so it seems that Jouvenia needles were made and marketed in France, in spite of the British patent.  Yet one pair at least ended up in Huddersfield.

Altogether a fascinating little collection of knitting needles.  If you like that sort of thing.