The Man with the Golden Cardigan 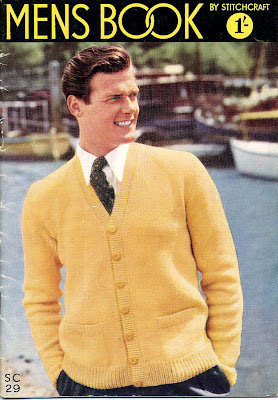 As it's the Queen's Diamond Jubilee, there is a lot of discussion of 1952 in the media, so why don't I join in?  One thing that was happening in 1952 in knitting only became noteworthy later  -  Roger Moore was at the peak of his career as a model for knitting patterns, before switching to acting.  The move worked out very well for him, of course, even if it was a loss to knitting.  The Stitchcraft Men's Book appeared in that year, I believe, and he featured in most of the 1952 issues of Stitchcraft, including two front covers. 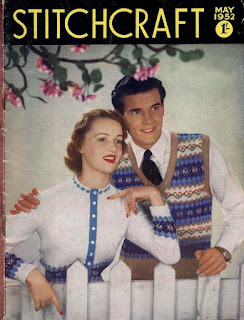 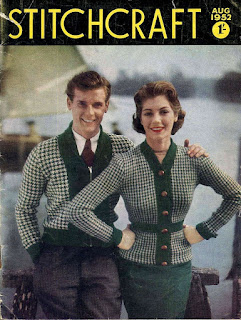 He looks very young (he was about 25) and really pretty good - male models of later decades often look ridiculous now (bad hair, dreadful moustaches and/or too much fake tan).
What looks most dated is that he is often posed with a cigarette or a pipe.  It seems quite shocking now to see a model smoking.  And I associate pipe-smoking with much older men, though perhaps it wasn't like that in 1952.
Posted by Barbara at 09:41