Last week I was in Shetland, staying in Lerwick, for the 10th Shetland Wool Week. I had never been to Shetland before (or in fact anywhere that far north), so it was a fascinating week, quite apart from all the knitting-related activities. And we were extremely lucky with the weather, which was mostly dry and often very sunny, while back home in England it was raining for most of the week - a lot.

Walking along the Esplanade at Lerwick every day, there were wonderful views of boats anchored, and the sound beyond, dividing the mainland from Bressay island. This was the view over Hay's Dock, in front of the Shetland Museum, on a beautiful evening. 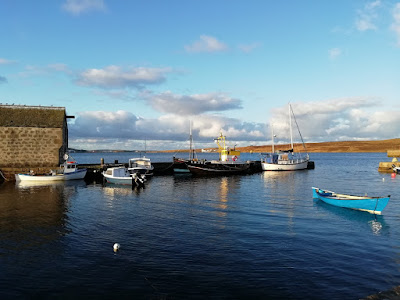 I arrived on Saturday, and my first Wool Week event was the Welcome on Sunday evening.  500 people were there - so as there were 1,000 people attending Wool Week, a lot were disappointed.  I wrote here about knitting my Wool Week beanie, in this year's design.  At the Welcome, almost everyone was wearing their beanie, and there was a group photo at the end of the evening. 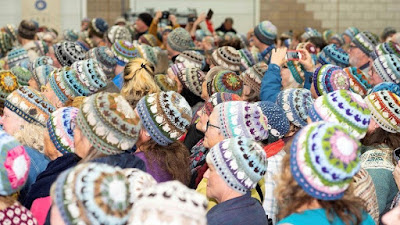 A photo of the Wool Week Welcome evening from BBC News.  I was there, wearing my Roadside beanie, though I can't see myself in this photo.

I spotted a couple of beanies that had substituted an image of something else for the fishing boats. A bicycle: 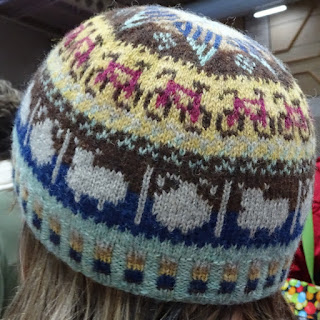 or a plane. Actually, I was told, a Bristol Blenheim, which has a WW2 Shetland connection. 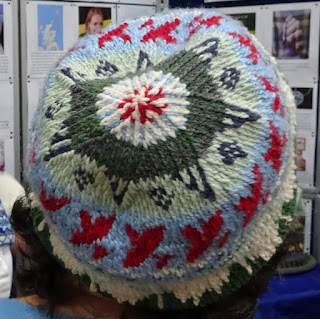 Most people attending Wool Week wore their beanies whenever they were outdoors (and it was cool enough that you wanted to be wearing a hat anyway).  It was a useful way of identifying fellow knitters too, and starting a conversation.

I hadn't booked any of the classes, partly because John had intended to come with me, but couldn't in the end.  So we had planned to see Shetland together.  One Wool Week event I had booked for both of us was a bus tour west to Vementry, and to Ollaberry and Islesburgh in North Mainland. It was a (mostly) fine day, and a good opportunity to see more of the Shetland landscape.  You never seem to be far from a loch or the sea on Shetland.

At Vementry, we saw their prize-winning Shetland sheep, mostly moorit (i.e brown), and Shetland ponies. It's a beautiful spot, overlooking the shore, and (I think) Vementry Island in the distance.

We had lunch at Ollaberry Community Hall - a lavish spread of homebakes laid on by local women. There was an exhibition of knitwear - some new, some that had been kept carefully, for many years in some cases.  I was very taken with the large lampshade in Print o' the Wave (one of my favourite lace stitch patterns): 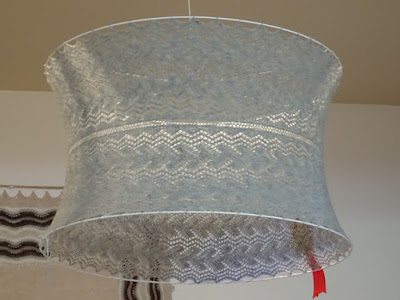 I also liked an outfit from the late 1960s, mainly because of its story.  Its owner said that her mother had knitted it for her when she went off to college in Aberdeen. There was a photo of her with friends, about to get the ferry, and wearing the outfit with a much shorter skirt - though actually, she said, she never wore it much because it wasn't really in fashion at the time. And her mother thought it was much too short, and added a piece to make it longer. A very 1960s teenage experience. 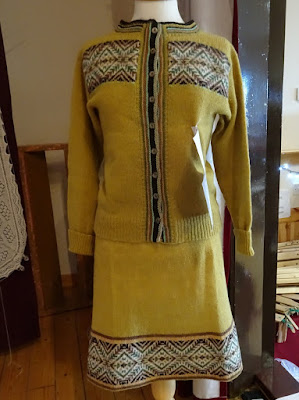 We ended the day at Islesburgh Farm, where we saw more prize-winning Shetland sheep, of several colours. (Some sheep evidently think that if they can't see you, you can't see them. They were mostly trying to hide their heads underneath another sheep.) 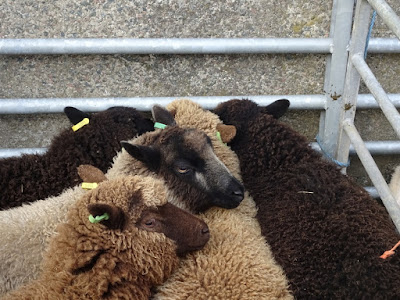 Another day, I went on a tour of Chris Dyer's croft on Bressay, a short ferry ride from Lerwick.  We saw more sheep - here Chris and his dog are driving them: 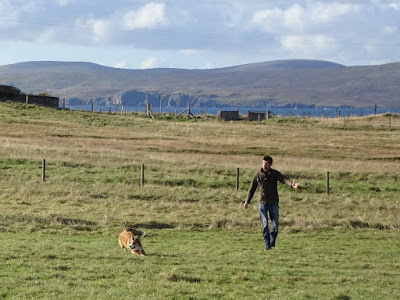 Chris has pigs and piglets, too.  And tomatoes, courgettes and peppers growing in a Polycrub, a specially strong version of a polytunnel, designed to withstand Shetland winds. He talked to us about his approach to running the croft, alongside his main job as an archaeologist.

Chris took us to the Speldiburn cafe on Bressay for lunch, where there was another exhibition of knitwear.  Again, some new, some old.  I particularly liked a couple of children's pullovers from the 1950s, both mainly pastel colours on a dark brown background. I don't think I know enough to judge, but that kind of colour combination seems to me to be different from  modern Fair Isle designs. 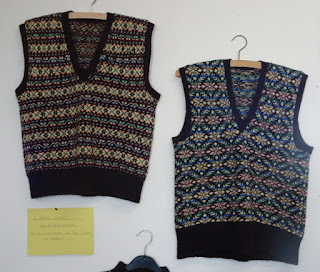 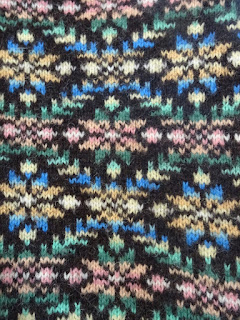 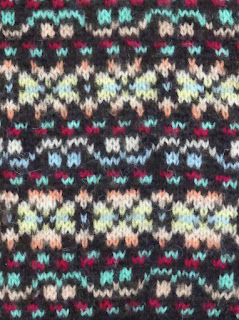 One day when I had no Wool Week events booked, I went for a walk around Lerwick, first past a group of old houses built almost in the sea, the lodberries, one of which is Jimmy Perez's house in the TV version of the Shetland books by Ann Cleeves. 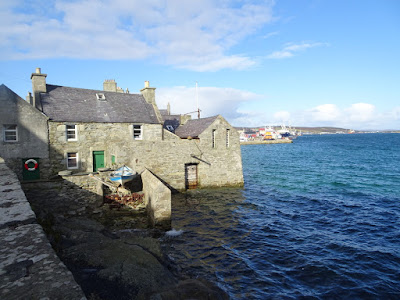 On towards the Knab, the headland at the end of the road, where there is a cemetery with I think the best view of any cemetery I have seen. 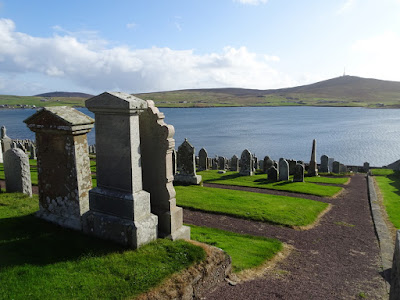 There are a number of war graves in the cemetery, of men who were stationed on Shetland. So they were not necessarily Shetlanders - some were in fact Norwegian. 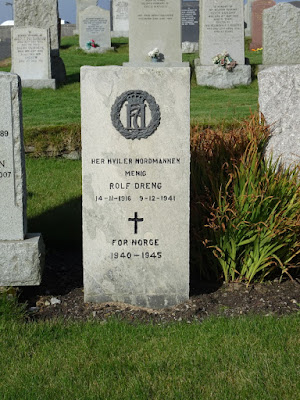 Here's the Knab, and the view south towards the open sea. 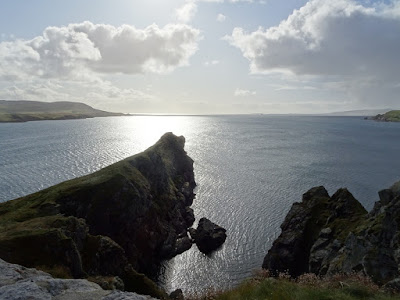 The path follows the shore from there (towards Tesco).  I hoped to see some seals on the rocks, but there weren't any, though I did see a lot of birds including a group of oystercatchers (called shalders in Shetland). 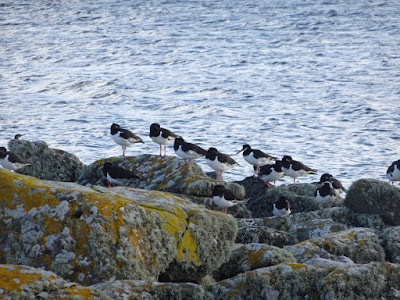 Another day, I got the bus to Scalloway, a fishing port about 6 miles from Lerwick, with an interesting museum, a castle, and some very picturesque houses along the harbour. 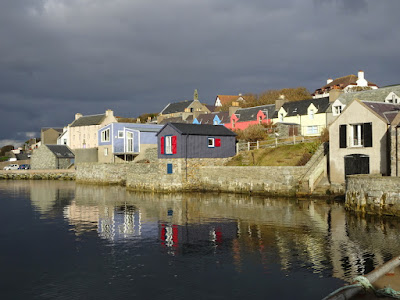 .
The base for Wool Week was the Shetland Museum in Lerwick, which is excellent. It has displays on the archaeology and history of the islands, including Gunnister Man, who died about 1700.  His body was found in a peat bog, and his clothes have survived, including some knitted articles.  There is a reconstruction in the museum (hard to photograph because of reflections in the glass of the case).

There are also displays on Shetland knitting, with many beautiful examples of both lace and Fair Isle.  I recognised one straightaway from Susan Crawford's Vintage Knitting Project book - Jeannie Jarmson's sleeveless rayon pullover, which is one of the patterns Susan re-recreated for the book. (Again, I couldn't get a good photo of it.)

The Hub, where Wool Week visitors could sit to knit and chat, was in the Museum, as was the auditorium where I gave a talk on the Knitting & Crochet Guild collection on Wednesday evening - I'll say a bit about my talk in another post.

And on Fair Isle Friday, two Shetland ponies who have often been photographed in Fair Isle cardigans, were stationed in front of the museum. (Their owner said that they don't really like the cardigans, because they can't walk easily in them.  And they have such thick coats of their own that they don't need to wear woollies.) 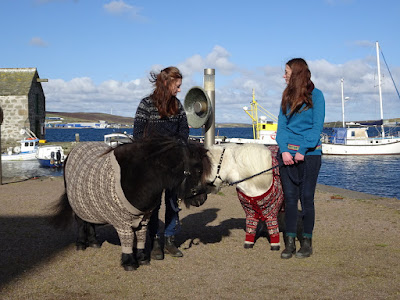 I'll also write in another post about the trip to the Jamieson's Mill at Sandness, where (guess what?) I bought some wool.   But that's enough for now.  I didn't do any of the many classes on offer, but there was plenty to see and do without that.  I enjoyed the week very much (though it would have been more fun if John had been there).  I'm very glad I went.
Posted by Barbara at 16:56