Improved Holder for a Ball of Wool

I was looking closely yesterday at a recent donation to the Knitting & Crochet Guild collection - a yarn holder. 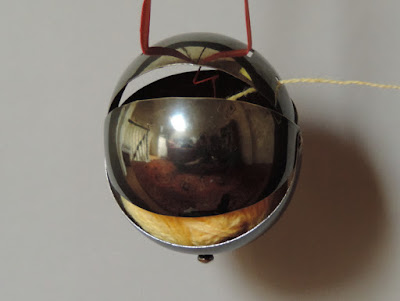 (At least, we assumed it was a yarn holder - and you can indeed get a small ball of wool inside it. But I have never seen one like it, and if it wasn't anything to do with knitting or crochet, it might equally well have been some strange accoutrement for a medieval knight.)

It didn't at first sight have any markings on it, to indicate who had made it.  But then I saw a patent number, engraved very small.

I do like a gadget with a patent. I found the patent on Espacenet, and yes, it is a yarn holder.  The patent was granted in 1923 to John Blennerhassett, Manufacturer, of 60 Regent Place, Birmingham, for an "improved holder for a ball of wool or the like for use while knitting or crocheting."  The patent has a drawing of a holder exactly like ours, although the patent suggests that it could be varied in several ways.

The patent describes a holder "embodying three or more hollow ball segments all but one of which are fixed, and the remaining one of which is diametrically pivoted upon the others to swing aside to open the holder" to allow the ball of wool to be placed inside.


No dimensions are specified in the patent, but ours is quite small - about 7cm. in diameter.

As the patent says, "It is of advantage to leave between each segment a space .. so that the wool ball may be seen."  There are three openings in the top fixed segment - one for the wool, and two narrow slots for a strap, "by which the holder may hang from the arm of the user".  The ribbon with the holder (shown in the first photo) may be the original: it has a metal tag at one end, which may be the 'stop bar' mentioned in the patent that could be applied to the strap. But if there ever was a tag at the other end, it is missing, and the tag is not in fact big enough to stop the ribbon going through the slot.  Of course, it would be easy enough to thread a new thin ribbon through the slots and to tie the ends together, so the stop bars are not essential.

The patent didn't tell me anything about John Blennerhassett's business, but I have managed to find out a bit about him.  He was born in 1888, the son of a bricklayer.  By the 1911 census, he was prospering: he was a diemaker (so already working with metal), and an employer.  (He was also doing well in his personal life: he was lodging with the Law family, and married their elder daughter the following year.)  A short obituary of John Blennerhassett in the Birmingham Daily Post in 1969 says that he founded the firm of Hassett and Harper Ltd., described there as a metal pressing firm.  The Regent Place address, given in the patent, is the company's.  Before World War II, the company seems to have made small items exclusively, mainly in silver and pewter. The company name led to a lot more information here about John Blennerhassett, from a site about the Blennerhassett family tree.

Grace's Guide lists the company, and gives their entry in the exhibitors list at the 1929 British Industries Fair: "Manufacturers of Silver, Tortoiseshell and Enamel Brushware, Caskets, Cups, Cigarette Cases and Boxes, Flower Vases and Bowls, Military Sets, Manicures, Photo Frames, Tea Sets. Special Line in Tear-off match Cases. Birmingham Jewellers' and Silversmiths' Association Member."   So our wool holder would have fitted into that list and would probably have been seen as a luxury item.  It does look very striking, though to me it doesn't seem very useful by modern standards.  It can only hold a small ball of wool - it wouldn't hold a 100g. ball, for instance - and I think that most knitters and crocheters now would prefer a yarn holder that sits on a table, rather than having to carry it hanging from the wrist. But it is an ingenious idea, and completely different from any other yarn holder in the Guild collection.